Mars Could Have Had Underground Life For Millions of Years 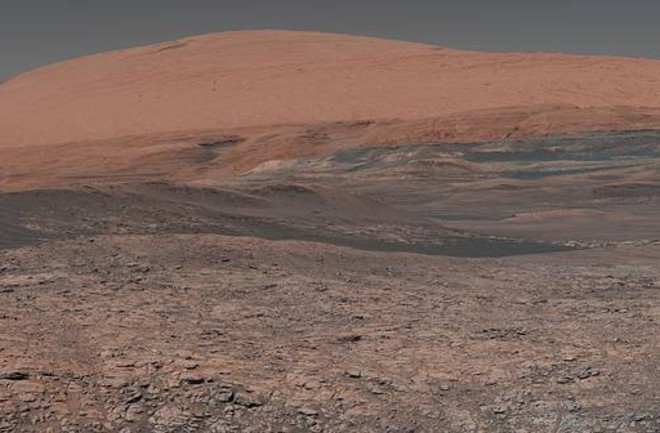 The surface of Mars, imaged by Curiosity. (Credit: NASA)

For decades, scientists have been scanning Mars’ surface for signs of ancient life. But by digging a little bit deeper, they’ve come across historic habitable zones in unexpected places.

After expanding their search, a team of researchers found that the Red Planet’s ancient subsurface could have housed microbial life for hundreds of millions of years. By borrowing hydrogen electrons from water, microbes could’ve had enough energy to not only survive underground, but to thrive for miles below the surface. If true, future missions could search areas where the subsurface is now exposed and potentially prove the existence of Martian life once and for all.

The study, led by Brown University researchers and published in Earth and Planetary Science Letters, was inspired by a curious phenomenon on Earth. Vast communities of underground microbes here live in darkness without access to the Sun’s chemical energy, the sole source of energy for most organisms on the planet. These enterprising bacteria, though, manage to survive by bumming hydrogen electrons from the water molecules that seep into the subsurface, a process that produces enough energy for them to live on.

Mars obviously doesn’t have the surface water needed to support life nowadays, but with clear signs of historic, flowing water, it likely did. Similar microbes could have theoretically existed there, too.

Despite harsh conditions, Mars’ extremely thin atmosphere and intense radiation would have actually supported these ecosystems. When radiation hits surface water, it kicks off a process called radiolysis, where water molecules to break down into hydrogen and oxygen. Once the molecules are broken down, microbes can easily use the molecular hydrogen to fuel their existence.

To find out if these underground communities could have existed, the research team looked at three different factors. First, they used data from NASA’s Mars Odyssey spacecraft’s gamma ray spectrometer to chart abundances of thorium, potassium and uranium in Mars’ crust. These elements give off radiation when they break down, kickstarting radiolysis. They also decay at constant rates, so by calculating their current abundances, they could estimate how much radiation rained down throughout history.

Embedded lake beds and dried up rivers tell us that there was no shortage of water exposed to radiation, but the team still needed to figure out how much of it soaked into the ground. To do so, they used density measurements to see how porous Mars’ crust was, allowing them to estimate how much hydrogen dripped into the subsurface. The last step was to look for underground regions that boasted a comfortable temperature. They used geothermal and climate models to see which areas were warm enough to harbor liquid water, but weren’t so warm that heat from Mars’ core would harm the ecosystem.

After adding up these factors, the researchers found that around 4 billion years ago, the Martian subsurface was soaking up enough hydrogen to energize microbes for hundreds of millions of years. Their model shows that the ecosystems extended several miles into the subsurface and could withstand both warmer and cooler conditions than expected. In fact, thick layers of ice actually trapped hydrogen molecules underground, making extremely cold regions the ideal home for hungry microbes.

“People have a conception that a cold early Mars climate is bad for life, but what we show is that there’s actually more chemical energy for life underground in a cold climate,” said the study’s lead author, Jesse Tarnas of Brown University, in a press statement. “That’s something we think could change people’s perception of the relationship between climate and past life on Mars.”

There are still a lot of factors to take into consideration, though. The study assumes that Martian microbes looked like those on Earth, when they could have behaved completely differently. Plus, whether or not any sort of life has existed on Mars is still unknown. But showing that it would have had enough energy to survive is another hopeful sign of extraterrestrials there.

The only way to prove this theory, though, is to investigate areas where the subsurface is now exposed, like deep meteor impact craters. Luckily, NASA’s Mars 2020 rover will soon be heading to the Red Planet, and will use this new data to continue our never-ending search for Martian life.