Magnetars are the highly magnetic corpses of massive stars. Recent observations show magnetars cause the mysterious Fast Radio Burst signals that astronomers have detected for more than a decade. 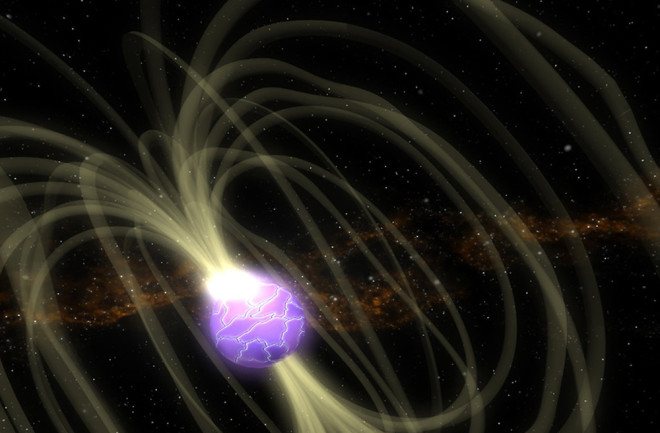 Magnetars, short for “magnetic stars,” are ultra-dense corpses of dead stars surrounded by intense magnetic fields. And according to new research, magnetars also appear to be the cause of at least some mysterious fast radio bursts, or FRBs, which astronomers have detected for more than a decade. So, by studying FRBs, scientists think they might be able to peel back the onion on magnetars.

What is a Magnetar?

When a massive star exhausts its nuclear fuel, it will often die in dramatic fashion, exploding as a supernova. The star’s outer layers erupt into space, and its core collapses into an extremely dense new object called a neutron star. These stellar corpses are mind-bogglingly dense. Most neutron stars are roughly 14 miles (23 kilometers) across, despite weighing more than our sun. You can think of them as a single atomic nucleus scaled up to the size of a city, astronomers say.

Some neutron stars are pulsars, which spin at dizzying rates and emit bursts of radiation through jets. But a few young neutron stars, roughly 10 percent, go on to become magnetars. The term magnetar comes from the fact that these stellar remnants are surrounded by intense magnetic fields many millions of times stronger than any magnet on Earth. In fact, magnetars are so magnetic that they could tear apart — at the atomic level — any space traveler who ventures too close.

“A magnetar is a type of neutron star whose magnetic field lines are so strong, they squish atoms into thin, pencil-like shapes,” Christopher Bochenek, a graduate student at Caltech and study co-author, said at a media event.

An artist’s impression of a magnetar. (Credit: ESO/L. Calçada/Wikipedia)

However, even astronomers themselves don’t always agree on what defines a magnetar. Is it their flares of radio waves or X-rays? Is it some specific property of their magnetic fields? In the past, different groups of astronomers would observe the same star, but some would identify the target as a pulsar, while others would classify it as a magnetar.

Part of the problem, it turns out, is simply a lack of data. There are just 29 known magnetars in the Milky Way. This means that much of what astronomers know about magnetars comes from interpreting models. But that could change soon.

According to new observations, magnetars seem to produce FRBs, which have mystified astronomers since 2007. Lasting just a millisecond, these blasts shoot out as much energy in radio waves as the sun emits over a full 30 seconds.

“Magnetars have been regarded as one of the top candidate sources to produce FRBs,” according to Bing Zhang, an astronomer at the University of Nevada in Las Vegas. “People have been speculating this for many, many years.”

And in April 2020, astronomers finally got confirmation that they were right.

Multiple radio telescopes detected an FRB from a magnetar near the center of the Milky Way called SGR 1935+2154. The dozens of other FRBs detected before that had all come from far outside our galaxy, making it impossible to track their source. However, the FRB from SGR 1935+2154 was close enough that astronomers also detected other emissions, like gamma-rays and X-rays.

Now astronomers hope to use FRBs to learn more about magnetars.

Various models of these dead stars had suggested there were several ways that magnetars could create FRBs, and each origin story would leave a unique calling card. One way magnetars could produce FRBs is through flares, which would send particles careening into surrounding material left behind by previous flares. Such collisions could ignite a shockwave that’s visible from thousands — or even billions — of light-years away.

But whatever the full connection between FRBs and magnetars turns out to be, it’s becoming increasingly clear that to understand more about one, researchers must learn more about the other. So, now that astronomers have finally confirmed magnetars can produce FRBs, they think the next few years could lead to a flurry of new discoveries about these magnetic monsters.

Read More: In Search of the Galaxy’s Magnetic Monsters