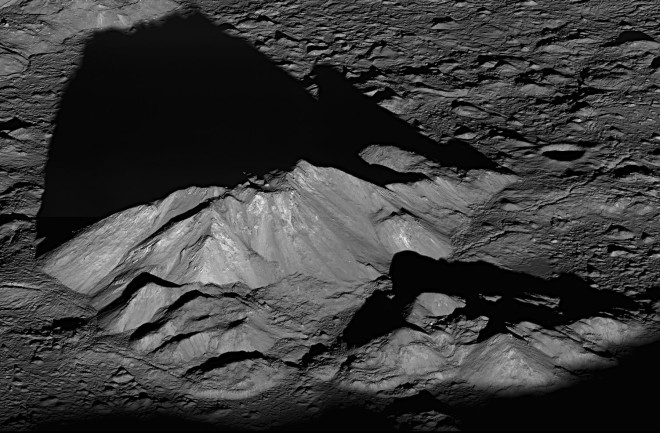 The central peak of Tycho Crater on the Moon rises 6,547 feet from the crater floor in this image from the Lunar Reconnaissance Orbiter. (Source: NASA) In anticipation of the Lunar Reconnaissance Orbiter's fifth anniversary in space, NASA launched a "Moon as Art Campaign" in which the public was invited to choose a favorite orbiter image for the cover of a special image collection. And the winner is . . . The spectacular image above showing the central peak of the Tycho Crater near the southern polar region of the Moon. NASA made the announcement yesterday, exactly five years after the orbiter was launched into space from Florida, on June 18, 2009. In the oblique view above, the rugged central peak rises 6,547 feet from the crater floor; it is 9.3 miles wide from left to right. Click on the image for a larger view and look for the boulder perched in a depression at the summit. It's more than 300 feet across. Here's a closeup view, also from the orbiter:

A closeup view of a giant boulder perched at the summit of the central peak of the Moon's Tycho crater. The image was acquired by the Lunar Reconnaissance Orbiter. (Source: NASA) Imagine standing at the base of that thing. From left to right this single boulder would be about as wide as a soccer field (or football field — take your pick). The stark white-ish color would stand in dramatic contrast to the blackness of the lunar sky.

In this mosaic of LRO images of Tycho crater, north is up. The crater is 81 miles (130 km) wide. (Source: NASA Goddard/Arizona State University.) In this mosaic of Lunar Reconnaissance Orbiter images you can see all of Tycho crater, which is 81 miles across. It formed about 110 million years ago when a large impactor smashed into the surface. But why the central peak? Here's a clear and concise explanation from the Lunar and Planetary Institute:

For larger craters (typically a few tens of kilometers in diameter) the excavated crater becomes so great that it collapses on itself. Collapse of the material back into the crater pushes up the mound that forms the central peak. At the same time, the rock beneath the crater rebounds, or bounces back up to add to the peak.

What about the impactor? Recent research suggests that it originated when two huge asteroids collided, producing many large fragments. One of those fragments may have been the one that crashed to Earth 65 million years, excavating the Chicxulub crater now buried beneath the Yucatán Peninsula in Mexico, and triggering a mass extinction event that did in the dinosaurs. Another fragment may have been the impactor that gouged out Tycho crater on the moon. One last picture:

An image of Tycho crater captured by the Hubble Space Telescope. (Source: NASA) Okay, I can't resist — how about video?