Living and Dying With a Comet 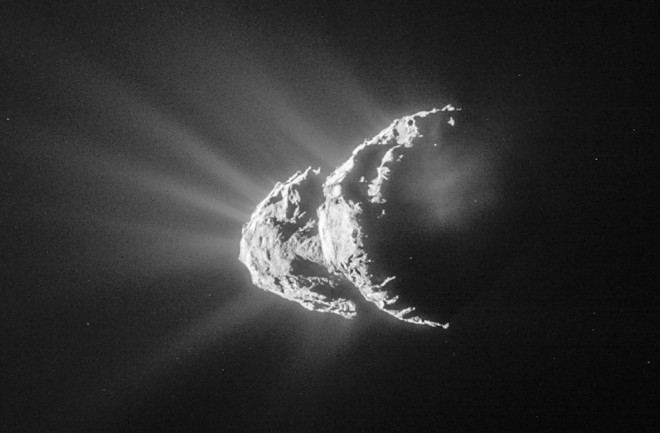 Comet 67P on April 28, 2015, as it was nearing closest approach to the sun and starting to really cook. (Credit: ESA/Rosetta/NavCam) Like many other space enthusiasts around the world, I woke up today in a bittersweet mood as I read the reports about the death of the European Space Agency's Rosetta comet probe. Its demise was carefully planned and long foretold but was sad all the same, putting a period at the end of a story that rolling out for more than 12 years. During that time, Rosetta made three passes by Earth, one by Mars, visited a pair of asteroids, and spent more than two years scrutinizing Comet 67P/Churyumov–Gerasimenko (typically shorted to "Comet 67P" for obvious reasons). It was the first spacecraft to orbit a comet. It also deployed the first-ever comet lander, Philae. Now all that is over. No way around it, the end of a great adventure is bitter. The sweet part is the extraordinary science Rosetta has conducted along the way. Early results confirmed the presence of diverse organic compounds; showed that comets alone could not have provided the water that fills Earth's oceans; mapped the surprisingly complex magnetic environment around Comet 67P; and catalogued enormous eruptions of gas and dust--roughly 100,000 kilos [200,000 pounds] at a time--that show how comets disintegrate under the force of solar heat. Much of Rosetta's dataset has yet to be fully analyzed. Planetary scientists will be mining new insights from it for many years to come. The time and effort that went into the Rosetta mission only intensify the bitter and the sweet. Planning for the mission began in 1985, when the mission was known as CNSR, for "Comet Nucleus Sample Return." Many things changed along the way as budgets shrank, NASA dropped out as a partner with the European Space Agency (ESA), and the whole idea of bringing home samples of the comet had to be abandoned. (I discuss the mission's twisted history in more detail here.) Even after launch in 2004, Rosetta needed more than 10 years to reach the comet. That is the longest gap ever between launch and arrival for a space probe, longer even than New Horizon's 9-year journey to Pluto. The payoff from this drawn-out timeline is that Rosetta saw remarkable sights along the way. Its two-year main mission lasted so long that the ESA described it as "living with a comet." The agency created a series of affecting cartoon animations that anthropomorphized the spacecraft in a way that greatly amplified the "living" aspect. And then there are the astonishing images that Rosetta has returned. The spacecraft is dead, but the emotional power of these views, along with their perception-altering qualities, insure that they will live forever as milestones in the human exploration of the solar system. For more space news and images, follow me on Twitter: @coreyspowell

Above: On its second Earth flyby, Rosetta captured this poetic view of our planet's nightside, ringed by sunshine and dotted by city lights. (Credit: ESA/MPS/Osiris)

Above: While getting a gravity boost from Mars, Rosetta's lander snapped this unique shot of the probe silhouetted against the Red Planet. (Credit: ESA/Rosetta/Philae/CIVA)

Above: Another stunning Rosetta selfie, with the probe's solar panel stretched out toward a double-crescent Comet 67P. (Credit: ESA/Rosetta/Philae/CIVA)

Above: Something no human has ever seen before: A comet backlit by the sun (which is just outside the frame of this image). Note the long streamers of dust escaping. (Credit: ESA/Rosetta/NavCam)

Above: Despite its diminutive size (less than 7 kilometers/4 miles across its longest dimension), Comet 67P displays a complex shape and diverse landforms. (Credit: ESA/Rosetta/MPS/Osiris)

Above: The dusty sky and craggy landscape of Comet 67P seem almost tactile in this Rosetta shot. (Credit: ESA/Rosetta/MPS/OSIRIS)

Above: Enhanced color view of Comet 67P reveals hints of water (blue) beneath a ubiquitous layer of dust. Analysis of the diverse structure and composition on display here indicates that the two lobes here began life as separate comets that merged in an ancient, low-speed impact. (Credit: ESA/Rosetta/MPS/OSIRIS)

Above: 24 of the brightest outbursts observed while Comet 67P was at perihelion, its point closest to the sun. Rosetta revealed that comets are geologically complex, shedding material through many different processes depending on location. (Credit: ESA/Rosetta/MPS/OSIRIS)

Above: The final views sent back from Rosetta. At left, a mosaic of views during descent to the comet. At right, the very last image ever transmitted, from a distance of just 51 meters [167 feet]. RIP, intrepid probe. (Credit: ESA/Rosetta/MPS/ OSIRIS)