Liftoff! NASA's New Rocket Takes to the Sky in a Successful Test Flight 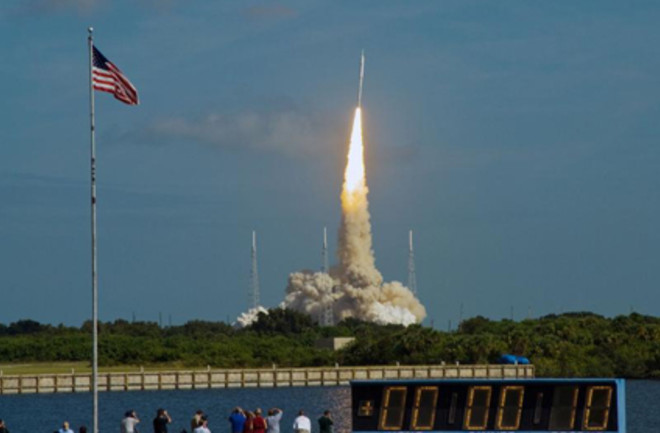 This morning, NASA's experimental Ares I-X rocket blasted off a Florida launch pad and roared through the atmosphere, successfully executing the first test flight of the rocket that may carry astronauts to the International Space Station and beyond once the space shuttle is retired. However, debate over the direction of NASA's manned space flight program means that the rocket's future is far from certain. The prototype rocket

took off through a few clouds from a former shuttle launch pad at 11:30 a.m., 3 1/2 hours late because of bad weather. Launch controllers had to retest the rocket systems after more than 150 lightning strikes were reported around the pad overnight. Then they had to wait out interfering rain clouds, the same kind that thwarted Tuesday's try [AP].

Engineers had been concerned that if the rocket took off through rain clouds, the moisture might cause a phenomenon called triboelectrification. This

occurs when the rocket encounters water or ice droplets in the clouds. As these collide with the rocket they cause a static charge to build up on its skin, creating interference with radio signals. This is a problem for the 1-X team, which needs clear signals to gather data from 700 sensors wired throughout the vehicle, which are designed to collect flight data [BBC News].

Firing its motors for just over two minutes, the Ares 1-X rocket flew to an altitude of 28 miles (45 km) and reached a speed nearly five times the speed of sound [Reuters].

After two minutes the lower stage rocket booster separated and fell away from the upper stages; in a real flight the upper stage booster would then fire its engine to propel the astronauts farther from Earth. In this test flight, all the parts fell back and splashed down into the ocean and a parachute blossomed from the lower stage rocket booster to give it a gentle landing. In both this test flight and in real missions, the lower stage will be recovered and reused. The entire trial flight took about six minutes. The Ares I-X is only a prototype of the Ares I rocket, and it contained some dummy parts: The upper stage rocket booster and the crew capsule were both mock-ups. NASA's main objective was to verify that the massive lower stage booster rocket has enough power to lift the other components into space, and to confirm that its separation could take place safely and efficiently. NASA engineers will now spend months evaluating data from more than 700 sensors that collected information during the flight. Related Content: 80beats: New NASA Rocket May Not Be “Useful,” White House Panel Says 80beats: NASA’s Lanky Ares Rocket Gets Ready for a Test Flight 80beats: Presidential Panel: Space Travel Plans Are BrokenImage: NASA