100 Years After WWI, Nature Is Finally Reclaiming A Historic Battlefield

A region in France devastated by battle undergoes an ecological makeover. 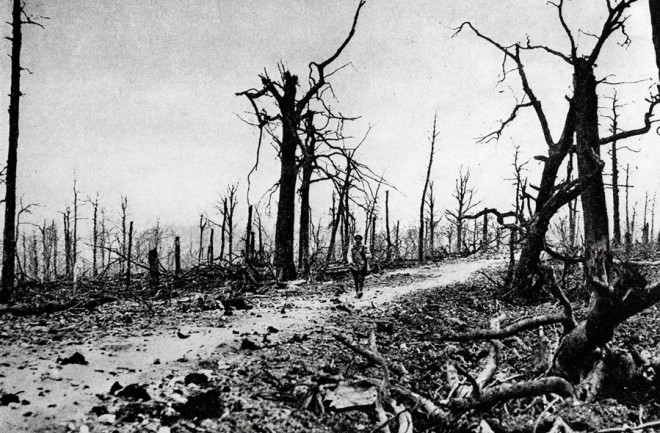 The Battle of Verdun in northeastern France was one of the longest and bloodiest clashes of World War I, claiming roughly 300,000 lives. It also decimated the landscape: Intense artillery fire felled nearly all of the region’s trees, and millions of exploding shells left deep depressions, exposing the limestone bedrock.

Now, 100 years after the end of World War I, recent research shows that new plants and animals have claimed the former battlefield as their habitat. They are adapting to the unique landforms of shell craters and underground shelters created by war.

The German attack in February 1916 was designed to break the will of France and “bleed her to death,” in the words of Germany’s chief of the general staff. The French were fiercely proud of the Verdun region and its massive forts, constructed after a humiliating loss to Germany in the Franco-Prussian War of 1870-1871.

After 10 months of intense fighting, the destruction of the landscape was so complete that some pilots flying over said it resembled a moonscape. Human remains, unexploded shells and rusted barbed wire littered the enormous battlefield, which encompassed nine destroyed French villages, including Verdun. Lead and arsenic, from bullets and bombs, permeated the soil.

After the war, the French government purchased the land and designated 23,000 acres as a Zone Rouge (Red Zone). This region was unsuitable for permanent settlement and too dangerous for regular public access. In addition, the memory of the war was too vivid to develop the land for another purpose.

In the 1920s and ’30s, to stave off erosion, government officials oversaw the planting of 36 million trees, mostly pine and spruce, in part of the Zone Rouge. These young trees, along with stands of older growth that survived the fighting, came to be called the Verdun forest.

The area was largely left alone for decades. Most of the visitors were hunters and war remembrance groups. Meanwhile, the vestiges of war began to be concealed by the returning flora and growth of the planted trees.

In 2013, to prepare for the war’s centenary, the French National Forests Office arranged an aerial survey of the Verdun forest. During spring, a small plane flew low over the trees, equipped with a laser that emitted thousands of near-infrared pulses each second. By measuring the reflected light, scientists determined the precise elevations of billions of points on the forest floor.

From these light detection and ranging (also called LIDAR) data, scientists mapped not only the forest’s vegetation, but also the leftovers of battle: shell craters, trenches, bunkers and underground shelter entrances. “We have, down to centimeter resolution, a map of every single feature on the ground,” says Joseph Hupy, a geographer at the University of Wisconsin-Eau Claire who studies the Verdun battlefield.

The yellow-bellied toad (above) is new to the Verdun forest, inhabiting water pools formed in depressions originally made by spent shells from the World War I battle. Verdun is the toads’ northernmost habitat in Europe. Courtesy of Remi de Matos Machado

The maps are so good that there’s concern about them falling into the wrong hands. “It’s controversial to release these data because they might be used by grave robbers illegally looking for artifacts,” Hupy says.

Researchers have also used the LIDAR data to track the plants and animals that have recolonized or are newcomers to the forest. Depressions created by spent shells are a popular ecological niche. A few feet in diameter and depth, the depressions are often flooded by the region’s heavy rainfall and shallow water table. A variety of plants, including rare orchids, and several species of newts and frogs have flourished in them.

New species have arrived, as well. Among them are yellow-bellied toads, which also inhabit the depressions, says Remi de Matos Machado, a geomorphologist at Université Paris-Diderot in France. The toads, protected by the European Union, have a brown warty back and a striking yellowish underside. Verdun is their northernmost habitat in Europe.

New horsetails, ferns and grasses grow near entrances to underground shelters, their roots curling around the structures’ exterior stones. The shelters were dug by German and French soldiers as protection against enemy fire and the brutal winters of northeastern France. Bats hang from ceilings inside the cavelike shelters, though it’s unclear if any of the 15 species are new to the region. The rough brick and stone interiors of the shelters are ideal for roosting.

In other areas, American blue-eyed grass offers up an arresting display of color. Seeds of the grass were likely transported to Verdun by American soldiers fighting alongside the French.

The Verdun forest has multiple purposes. The French National Forests Office manages it as a timber source; its staff plants seedlings and prunes trees.

The forest is also the site of several memorials, including a cemetery with over 16,000 graves and an ossuary filled with the remains of soldiers on both sides of the battle. And the ground itself is considered sacred, a final resting place for roughly 80,000 soldiers whose bodies were never recovered.

The forest as well is a kind of wildlife sanctuary, where plants and animals thrive both despite and because of the region’s violent history.

Since thousands of tourists visit the site each year, conservation efforts are underway to protect the landscape and the flora and fauna from human influence. “Erosion is increasing, and landforms are in danger,” de Matos Machado says. The yellow-bellied toad and bat populations are monitored closely, and hiking trails now guide visitors around sensitive areas.

The Verdun forest’s battle-scarred history, status as a memorial to fallen soldiers and ecological rebirth combine to make it special, de Matos Machado says. “There is no place like this.”