LHC Back Online, With an Extra Shot

The upgraded particle collider gets supercharged. 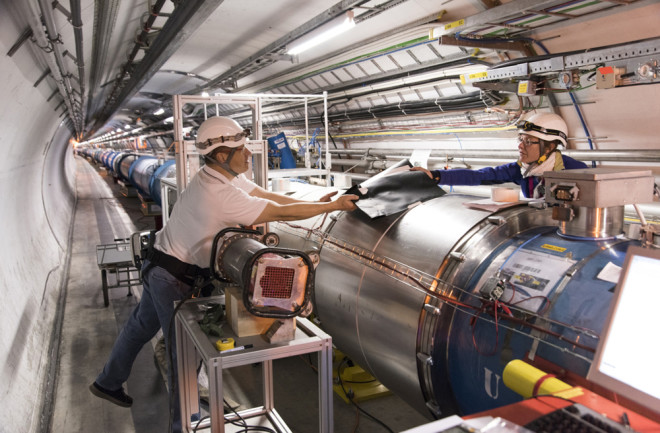 Technicians at the Large Hadron Collider conduct radiography tests of the connection between an LHC magnet and its diode in March. | Maximilien Brice/CERN

After a two-year shutdown for upgrades and maintenance, the Large Hadron Collider (LHC) — already the world’s largest and most powerful particle accelerator — is back online and more powerful than ever. The LHC’s particles, which whiz around a 17-mile loop at almost light speed, will now boast nearly twice the collision energy. While the 2012 discovery of the Higgs boson particle was a landmark event, it was basically expected. Physicists hope that with bigger energies come bigger findings: brand-new particles, evidence for theories beyond the Standard Model (the current paradigm) or even the discovery of dark matter’s identity. Hold on to your protons.

The Compact Muon Solenoid is one of four major detectors at the upgraded Large Hadron Collider, which was reactivated in June. | Richard Juilliart/AFP/Getty Images
1 free article left
Want More? Get unlimited access for as low as $1.99/month
Subscribe