Data from the tiny world known as Arrokoth reveal brand-new insights into how the planets came together. 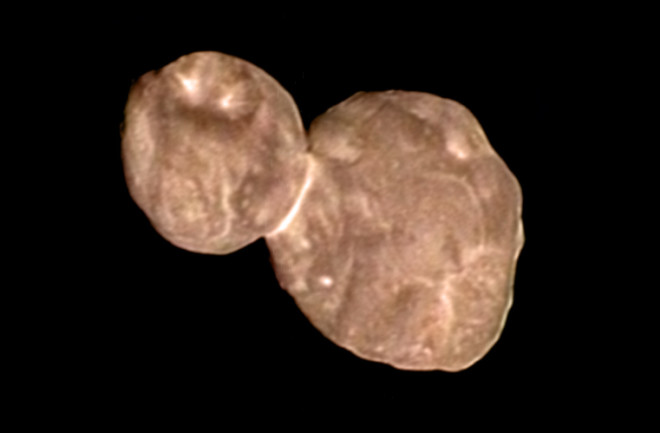 If you were on board the New Horizons spacecraft during its flyby of Arrokoth (once called Ultima Thule), the world would have looked visibly red to the human eye. That's likely caused by compounds called tholins. (Credit: NASA/Johns Hopkins University Applied Physics Laboratory/Southwest Research Institute)

On New Year’s Day of 2019, the New Horizons probe buzzed past a small, snowman-shaped world designated 2014 MU69. At the time of the flyby the distant object went by the unofficial name Ultima Thule, but its formal name, now approved by the International Astronomical Union, is Arrokoth, which means “sky” in the Native American Powhatan language. It is the farthest object to ever receive a flyby from an Earthly spacecraft, taking New Horizons 13 years to reach it.

Now, more than a year after the flyby, the data are in. Researchers from the New Horizons’ team presented their latest findings, based on a trove of new data from the spacecraft, Feb. 13 at the annual meeting of the American Association for the Advancement of Science in Seattle. The data represents a far larger portion of New Horizons’ findings than last year’s minimal transmissions, and the resulting analysis may change scientists’ understanding of how the solar system formed.

Astronomers know the solar system started as a nebulous cloud of gas and dust, which eventually resolved itself into the well-ordered system we see today. But the steps in between have been fuzzy.

Arrokoth, an ancient but unassuming body orbiting in the distant, cold region of the Kuiper Belt beyond Neptune, is perfectly poised to begin giving us answers. The distant world has likely changed very little since its formation around the time of the solar system’s birth, so it functions as a time capsule of sorts from that ancient milieu.

And the view of that ancient world, astronomers say, points clearly to a past in which objects like it formed from the direct collapse of the original solar nebula — the gaseous cloud that eventually collapsed to become our solar system.

Made up of two red-hued lobes, like a slightly flattened snowman, Arrokoth has a relatively smooth surface with few signs of asteroid impacts. Most importantly, the two lobes appear to have been moving and spinning in match step even before they made contact. One can imagine two lovers on a walk, gravitating toward each other even before they reach out and join hands.

“For decades, there’s been a war of computer models,” says New Horizons’ Principle Investigator, Alan Stern, in an interview with Discover. One side backed the so-called hierarchical accretion model, where dust grains collided to form pebbles, which formed rocks, then boulders, and finally large bodies in a long and violent game of bumper cars. The other side argued for cloud collapse, meaning the original nebula of dust and gas swirled together through gravity and very gently collapsed directly into larger bodies. It may seem like a fine distinction, but it’s one that has big implications for how our solar system came to be.

Arrokoth, orbiting in the remote hinterlands of the solar system, provides a never-before-seen view of how the process of forming planets actually happened.

“We never went to an object that was as primitive and well preserved as Arrokoth,” says Stern. “It’s basically unchanged since 4-plus billion years ago when it formed.” That makes it priceless for answering questions about the solar system’s deep past.

Early data from New Horizons last year hinted at a gentle crash between the two lobes that make up Arrokoth, evidence for the collision theory of solar system formation.

But, says Stern, with 10 times as much data and many months of computer modeling, they now see a different story, one that involves Arrokoth forming much more placidly.

“There are five different lines of evidence for cloud collapse,” he says, all pointing to the gentler formation theory. And if Arrokoth formed that way, it’s a sign the rest of the solar system's building blocks may have also emerged from a cloud of dust, rather than from the violent collisions of countless objects.

“Arrokoth has provided a decisive test between the two,” Stern said during the press briefing. “I believe this is a game changer.”

With more of the data now on Earth, researchers are revisiting their theories about this distant world. Arrokoth has a recognizable snowman shape, though the data seemed to indicate it might be flattened, more like two pancakes than two spheres. Updated observations show the pieces are still mostly round, and only slightly flattened.

The data also reinforce Arrokoth’s red hue, a feature it shares with many other distant solar system objects. Scientists think the red color is due to organic molecules similar to tholins, thought to be the building blocks of life.

Data on Arrokoth are still flowing from New Horizons to Earth, and won’t finish for another year and a half. But spacecraft managers sorted the data from highest priority to low, so it’s unlikely that information yet to be downlinked will dramatically change the picture.

In the future, mission planners would like to see New Horizons buzz by one more Kuiper Belt object on its trip out of the solar system. Stern says that unless the spacecraft malfunctions, it can continue collecting data until the late 2030s. But it should leave the Kuiper Belt in the late 2020s, so it has only a few years to scan the skies for its next target.

The new results were published in a series of papers Feb. 13 in Science.