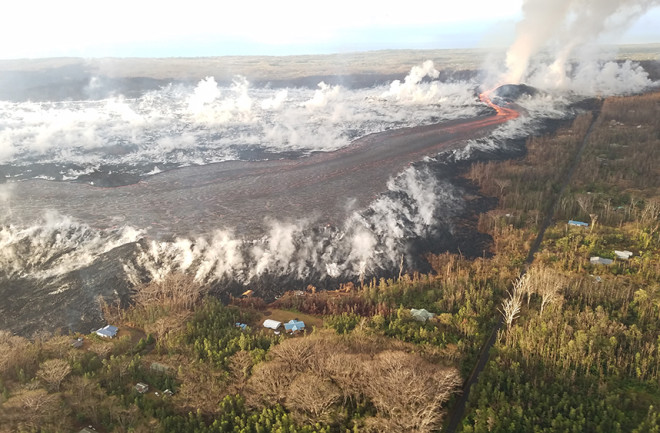 The channel of lava from Fissure 8 (in the background), seen on July 10, 2018. USGS/HVO. It is hard to believe, but the eruption on the lower East Rift Zone of Kīlauea shows no signs of stopping. The lava erupting from Fissure 8 just keeps coming, adding more to the big island of Hawai'i as the lava snakes its way to the Pacific Ocean. Meanwhile, up at the summit of the volcano, the Halema'uma'u Caldera continues to see dramatic changes as the whole surface slowly collapses with the daily explosions and earthquakes. The eruption itself is now the largest known historic eruption on Kīlauea (which means the last 200 years). The lava flows from Fissure 8 (top) are moving mainly through channels created by the lava itself. As the lava moves, the edges cool and you build levees on each side of the flow, building a perched channel where the lava continues to move (see below). Sometimes, those levees are topped over or breached and smaller flows can leak out the sides of the major channel. That seems to be the current pattern in the Leilani Gardens flow field and those breakouts are what are expanding the area that these lava flows are covering on the land. Otherwise, the lava either builds up the thickness of the new lava flow field or spills out to the Pacific (below). The entire lava flow field now covers ~29 km^2 (11.2 square miles) and has added ~2.5 km^2 (630 acres) to the island.

A lava flow from the Fissure 8 channel that was formed by an overflow on July 11, 2018. USGS/HVO In some places, the lava flows have crusted over but are likely still carrying lava towards the ocean in lava tubes. Tubes are an even more efficient way to move lava as they are more insulated from the cold atmosphere, so a tube system will carry lava further. This is how the Pahoa lava flows in 2014 were able to get from the now-defunct Pu'u O'o vent down to the settlement of Pahoa.

Map of the lower East Rift zone lava field, as of July 11, 2018. USGS/HVO. At this point, I've become fascinated by the changes at the summit of Kīlauea. The slow collapse of the Halema'uma'u crater that once was home to a lava lake has continued and the USGS has posted some great videos and timelapses of the collapse seen from the ground and from space. In the shots taken from the ground (near the Hawaii Volcano Observatory building), over the span of about a month, you can see the crater floor first subside and then begin to crack as it sinks even further. Each explosion that happens from the summit vent releases the equivalent of a ~M5 earthquake, mostly generated by the floor of the crater continuing to sink. A satellite radar image shows the entire caldera area at the summit and you can clearly see how the crater vent has expanded over the course of the eruption. In a sense, we're seeing the creation of an all-new collapse caldera within the larger one -- a nested caldera.

Agenzia Spaziale Italiana CosmoSkyMed satellite radar images of the summit area of Kīlauea, showing the slow collapse of the main area. USGS/HVO. The end result here will be an entirely new summit area to the volcano, all caused by the change in vents on the East Rift zone. As long as magma is draining to Fissure 8, you can likely expect the summit area to continue to deflate/collapse. Of course, with a long-term and continuing disaster like these flows in Leilani Estates and vicinity, people have had to live in shelters and temporary housing for months now. Over 700 homes have now been consumed by the eruption, so many people have lost their homes and livelihoods. This leads to stressful conditions ... which then leads to anger and violence. There has also been reports of looting in the areas that have been evacuated and problems like these are why people will dare to enter or stay in closed zones, either to protect their property or steal. At the same time, people are pressing for a place to view the lava flows as a tourist attraction, something the local officials have been reluctant to establish. The response so far from the local government in Hawaii has been to propose that no new homes be built on potential high lava flow hazard zones, which means understanding the lava hazard across the island from Kīlauea, Mauna Loa, Hualālai and Mauna Kea will be vital. It might also mean that the people who lived in Leilani Estates won't be able to rebuild like people did during previous lava flows at Kīlauea though local officials on the Big Island aren't too receptive to the call to ban new building.