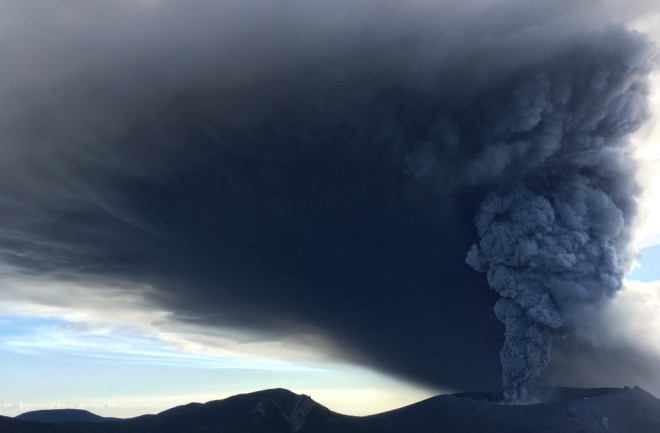 Kirishima in Japan erupting on October 12, 2017. Image by James Reynolds, used by permission. For the first time since September 2011, Kirishima in Japan has started erupting. On the morning of October 11, new ash emissions began from the Shinmoe-dake cone on the large, complex volcano on the north end of Kagoshima Bay. The eruption have been relatively small ash-and-gas plumes that reached less than 1 kilometer (~3,200 feet) over the volcano and spread shards of volcanic glass (aka ash) across the area. These new explosions have promoted the Japanese Meteorological Agency (JMA) to raise the alert status to Level 3 and declare an exclusion zone around the active vent. The plume from the eruption was clearly seen on Terra MODIS image (below) taken on October 11 (Universal time, so October 12 local).

The grey plume of ash spreading east (right) from the eruption of Kirishima, seen clearly against the green on Kyushu and blue of the Pacific Ocean. Image taken October 12, 2017 (local) by NASA's Terra MODIS imager. The eruption at Kirishima has been impressive in the clear weather. Thus far, only ash has been seen erupting from the Shimmoe-dake cone, so there is no evidence that new magma has reached the surface as the ash was likely generated from pulverizing old, cold lava in the lava dome in the crater. A small earthquake swarm started at Kirishima on October 5, leading JMA volcanologists to think that an eruption could be in the cards. Film maker James Reynolds was on site at Kirishima for the eruption on October 12 and got some dramatic drone footage of the eruption (note: all taken from outside the exclusion zone).

Drone footage I shot today of incredible eruption at #Kirishima#volcano in #Japan I've waited years to shoot this kind of video #新燃岳#火山pic.twitter.com/8BuTVw83MQ

Two things that really stand out to me in the footage: (1) the volcano's roar -- you can really hear that low, growling sound of the ash emissions from the vent and (2) the pulsing nature of the eruption, as ash and hot volcanic gases issue from the vent. You can also see how fine the ash looks in that has fallen inside the crater, which reminds me of eruptions where mostly old volcanic materials is being pulverized. Some other fumaroles (gas vents) can be seen to the left of vent in the footage as well. The ash quickly loses buoyancy and falls to the ground, showing there isn't a lot of "oomph" behind the eruption at this point. Looking at images taken October 11 (below), the very active steam emissions in the crater betray a lot of heat under the old lava dome.

Now, it is impossible to say where this eruption is going. If new magma is found in the ash, then likely Kirishima is entering another eruptive phase like we saw in 2011, where blasts went on for 9 months. However, if this is merely driven by steam and heat in the crater, then maybe it might be a fleeting moment. If you want to watch the eruption live, there are plenty of webcams

pointed at the volcano

. Right now (October 12), there isn't much going on at the volcano. Few other bits of volcano news from elsewhere: We talk about a plume that's a few hundred meters at Kirishima, but Shiveluch

in Kamchatka produced a 10+ kilometer (32,800 feet) plume on October 11. Thanks to its remote location and somewhat common occurrence, eruptions like these at Shiveluch rarely make the news anywhere.

in many years, with over 50 earthquakes deep under the island over a 3 day period. The last eruption at Cumbre Vieja was in 1971. Similarly, Oregon's Mt. Hood has a small swarm started under the White River Valley

near the Cascade volcano -- a spot where swarms are common and may be linked to faults that run near the volcano. Neither swarm suggests that either volcano is close to an eruption, but rather remind us that even quiet volcanoes can be restless occasionally.