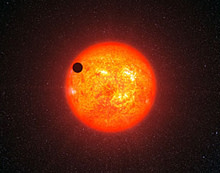 For months we here at DISCOVER have been waiting impatiently for the Kepler mission to open up its vault of new exoplanets, hopefully filled with a bevy of Earth-like worlds and other exotic planets. Today planet lovers got a new peek at the Kepler findings, and those findings are stunning. First, the Kepler scientists announced more than 1,200 candidate planets, which got DISCOVER blogger Phil Plait excited:

This is incredible! Even though I was expecting a number like this, actually hearing it for real is stunning. In 15 years we’ve found about 500 planets orbiting other stars, but in the almost two years since Kepler launched it may have easily tripled that number! Now, to be careful: these are candidate planets, which means they have not been confirmed. But in most cases these look pretty good, and if these numbers hold up it indicates that our galaxy is lousy with planets. They’re everywhere.

While those 1,200 are candidates, astronomers have confirmed a peculiar and fascinating set of six. From Phil Plait

Using NASA’s orbiting Kepler observatory, astronomers have found a complete solar system of six planets orbiting a sun-like star… and it’s really weird: five of the six planets huddle closer to their star than Mercury does to the Sun!

None of them is what I would call precisely earth-like — they’re all more massive and much hotter than Earth — but their properties are intriguing, and promise that more wonderful discoveries from Kepler are coming.

80beats: How Excited Should We Be About the New “Goldilocks” Exoplanet?