Kelud, Before and After the Eruption 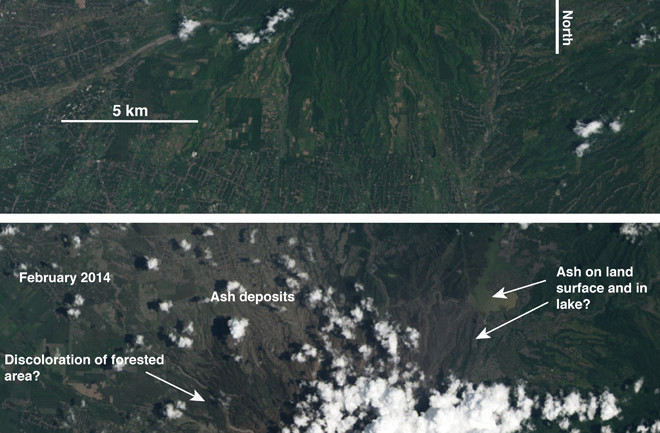 Landsat 8 images of Kelud in Indonesia before the February 14, 2014 eruption (top) and after (bottom). Image: USGS/NASA, annotated by Erik Klemetti. It has now been a few week since the dramatic (and unexpected) eruption of Kelud in Indonesia. Thankfully, it appears that the eruption occurred with minimal loss of life, impressive considering how close some people live to the volcano (see the images above to get a sense of that). There are still many thousands of people living in shelters around the volcano and may be there for quite some time as they wait for repairs to their homes and regional infrastructure. The conditions of these shelter camps has been of some controversy as well, with reports of no drinking water and poor sanitary conditions. Intense rain in the area of Kediri, near Kelud, has produced lahars from remobilized ash and debris of the eruption, adding to the plight of evacuees. In the images above and below, you can see some of the river drainages that come off the volcano that, even less than a week after the eruption, were full of volcanic debris. That material may have gotten there through earlier lahars or possibly even pyroclastic flows that moved down those channels. Lahars such as this will likely be a hazard for years to come (as they were for over a decade at Pinatubo in the Philippines).

Satellite image of the crater area of Kelud, seen on February 18, 2014. The previous dome was destroyed during the February 14 eruption and significant ash was deposited on the slopes and in the river channels around the volcano. Image: UN Disaster Charter / Digital Globe, used by permission. Looking at the before and after images of the eruption, a few things are clear. The dome produced during the 2007 activity has been destroyed (see above and below). Both the satellite images and the land-based images taken by Suwarno show that whatever dome there was has been replaced by a steaming crater. This isn't a surprise as such a dome might have helped developed the pressure to generate the massive explosion that occurred on February 14. David Pyle's Volcanic Degassing blog has a great post about his class using images from social media to estimate the volume of ash fall from the eruption -- he puts it at around 0.2-0.3 cubic kilometers, which is right around a VEI 4 eruption (or deciruption in my scale). Looking at some of the satellite images, that seems about right -- a large explosion, but not a colossal blast. One interesting piece of information I have yet to see is any analysis of the ash itself, so how much is made from the destruction of the dome and how much is new magma that came up during the eruption. Now that the 2007 dome is gone, the volcano can likely degas a little more passively, so another large explosion is less likely at this point ... at least until a new dome begins to form.

Before and after images of the dome area within the Kelud crater, showing how the 2007 dome was destroyed by the February 14 explosive eruption. Image: Suwarno, via Øystein Lund Andersen, used by permission. Øystein Lund Andersen has a great post with a multitude of images taken by Indonesia photographer Suwarno along with one's that Øystein took himself. What's impressive to me is the volume of light pumice from the eruption that filled the roads around the volcano. Some of his shots closer to the volcano clearly show the power of the pyroclastic flows, with charred and flattened forests (likely the darkened areas on the top satellite images) along with steaming deposits related to these flows. However, even with all these dramatic effects, what is remarkable to me is how much the top satellite images shows how little actually changed in the broad landscape. With the amount of rain and rapid vegetation growth in Indonesia, the deposits of this eruption will likely vanish within a few years -- and the only marker remaining might be the crater left by the destruction of the dome. However, more likely than not that will even be erased by subsequent activity that will either build a new dome or reshape the crater. What seems like large eruptions when they occur end up leaving only a small mark in the overall geologic record at a volcano.