Keep an Eye Out for These Volcanoes in 2016 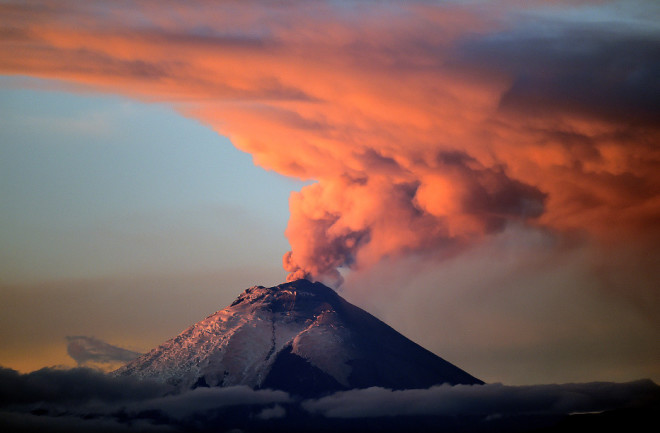 Cotopaxi volcano spewing ash on October 08, 2015. RODRIGO BUENDIA/Getty Images As we enter the new year, I tend to get a lot of questions about what volcanoes might be the ones to watch in the coming year. Answering is a difficult task, because volcanic unrest can spring up quickly. Trying to prognosticate about which volcanoes might erupt is about as predictable as who will make this year's baseball playoffs. Sure, you can make some fairly sure bets, but you never know when the next dark horse will emerge. So I thought I'd try to give you some of my thoughts on volcanic activity in 2016. By no means are these predictions. As of now, there is no reliable, tested way to predict volcanic eruptions precisely anywhere beyond a few hours to maybe days in advance (and don't believe otherwise). However, there are some places to watch and things to ponder as the months roll by. Without further ado (and in no particular order), a volcanic preview for 2016: Cotopaxi, Ecuador: There was a lot of rumbling and even a brief eruption at Ecuador's Cotopaxi in 2015, but nothing much beyond that. Now, I do wonder if the 2015 activity was just a prelude to something more---whether it be a larger eruption or merely more sustained and prolonged activity. The last major eruption from Cotopaxi was a VEI 3 back in 1903 and you have to go back to 1877 for something larger than that. However, up until the 1940s, the last few hundred years at Cotopaxi was littered with eruptions. So, any restlessness makes me wonder if we're headed back into a long stretch of eruptions. Right now, the volcano has settled down and the government has lifted the state of emergency, but you can watch the webcams for any changes. Mauna Loa and Kilauea, Hawaii: Kilauea is nothing if not consistent. 2016 marks 33 years of eruption at the Hawaiian volcano. You have to wonder how long can Kilauea keep this up (hint: probably much longer than 33 years). However, over the past year, Mauna Loa has also begun to show signs of restlessness and there are some indications (though they're still not proven) that Kilauea and Mauna Loa trade off eruptions. Even beyond the idea that a Mauna Loa eruption could end Kilauea's run, new lava flows from Mauna Loa have the potential to be hazardous for the city of Hilo. Etna, Italy: I just have this feeling that the exciting, explosive eruptions in December from Etna were only a prelude to an active year at the Italian volcano. There are no fewer than four craters on the volcano that have taken part in eruptions over the past year, so it is anybody's guess how new active series of paroxysms would unfold. If ever there was a safe bet for a volcanically-active year, it is Etna. It never hurts to keep an eye on those webcams. Nevados de Chillán, Chile (above): As the new year started, the SERNAGEOMIN in Chile raised the alert status at

Nevados de Chillán to yellow after a few months of increasing unrest in the form of small earthquakes and increased steam and volcanic gas emissions. Nevados de Chillán is one of the more active volcanoes in Chile, but it has now been over 15 years since its last eruptive period, so it wouldn't be out of the question to see renewed activity.

Cascades, United States: Now that it's 2016, we can officially say that the only Cascade Range volcano to erupt in the past century is Mount St. Helens. With 13 potentially active volcanoes from California to Canada, this seems like an awfully quiet period (and I've tackled some reasons why this might be). More likely than not, 2016 will pass without any activity from the Cascades and even if an eruption were to happen, it would probably be from Mount St. Helens, but we should keep a watchful eye on the others to see if the range awakens from its slumber. Wild Cards: When it comes down to it, many of the big eruptions of the past few decades have come from volcanoes that no one would have guessed: Pinatubo, El Chichón, Chaitén, Eyjafallajökull, and Sarychev Peak, to name a few. If a significant eruption comes in 2016, my bet is that it would be from a volcano that many haven't even considered. That's what can make volcano monitoring so treacherous (and exciting): You never know when a volcano that hasn't erupted for thousands of years will make itself known again. So, in 2016, keep your eyes open for new rumblings. If you have any hunches of your own, leave them in the comments so we can look back when 2017 arrives to see if we had any luck in guessing where the action was this year. (P.S. One volcano that has nearly zero chance of an eruption in 2016? Yellowstone. Take that to the bank.)