[I suppose this post has a PG-13 rating. Not for language or nudity, but for what may be a (humorously) disturbing image for some folks. Be ye fairly warned, says I.] So the European Southern Observatory took the Very Large Telescope, pointed it at NGC 1929 -- a cluster of stars 180,000 light years away in the Large Magellanic Cloud -- and got this amazing picture:

[Click to ennebulenate, or grab the huger 1780 x 1780 pixel version.] I was all set to talk about how this huge bubble -- over 300 light years across! -- is being blown into the gas surrounding the cluster by the combined mighty winds of the stars inside it, young massive stars that live short, violent lives that end in short, violent deaths, and how this will compress the gas further and induce even more star formation, but how in the meantime they're flooding the gas with powerful ultraviolet radiation that's lighting up the gas precisely like a neon sign, and how amazingly detailed this image is despite the cluster and gas being in another galaxy at a distance of nearly 2 quintillion kilometers... 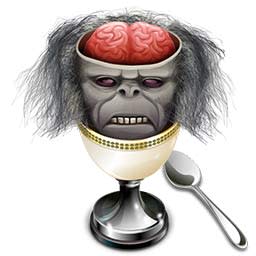 ... but then that all came to a crashing halt when I realized this nebula looks like a monkey with a giant hole in its head, and all I could think of was "Indiana Jones and the Temple of Doom." I guess that makes me more of a geek than an astronomer. But as a great archaeologist once said, "Nothing shocks me, I'm a scientist."

Related posts: - A bubble nestled in the Scorpion's sting - Supernovae popping off like firecrackers in Carina - Hubble sees baby stars eating sandwiches and blowing bubbles - A vast, cosmic cloudy brain looms in a nearby galaxy