Kaleidoscopic View of the Sun Reveals its Hidden Features 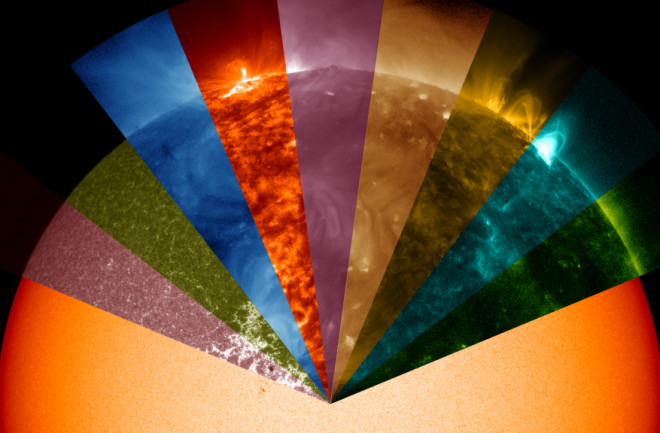 A screenshot of a movie of the sun from NASA's Solar Dynamics Observatory. The pie-shaped slices show the sun in different wavelengths of light that are ordinarily invisible to our eyes. Each highlights different kinds of features on the sun's surface and in its corona. (Source: NASA Goddard Space Flight Center) The human visual system is an incredible example of natural engineering that far surpasses the very best cameras and lenses. To offer one example, on a bright day with extremely contrasty light, it can discern fine details in both the dark shadows and bright highlights — details that are all but lost in to a camera. Even so, what we can see is extremely limited compared to what's actually out there — a fact that is dramatically illustrated by the kaleidoscopic view of the sun above. It's a frame from a movie put together by NASA to illustrate the abilities of the Solar Dynamics Observatory, an orbiting satellite that continuously monitors the sun. SDO's instruments are sensitive to wavelengths of light that are invisible to us. In the image, above (and the full video below), each pie-shaped slice represents a view of the sun in a particular wavelength. Viewing the sun in different wavelengths allows scientists to discern different kinds of features on its surface and in its atmosphere, called the corona. Here's the full video: http://www.youtube.com/watch?v=kS57VH3QN1g Remember that in the video, and the image up top, the coloring is artificial. Here are a few examples of what the various colored views show:

The video below shows a particularly spectacular example of what can be seen when viewing the sun in this latter wavelength. It was captured by SDO on July 19, 2012. First, a moderately powerful solar flare explodes from the sun. This is followed by an ejection of solar material, a phenomenon that's known as a coronal mass ejection, or CME. And then the really spectacular fireworks begin: http://www.youtube.com/watch?v=HFT7ATLQQx8&list=PLF14609877EF3419B&index=8 The massive loops of glowing material are what's known as coronal rain. This happens as plasma cools and condenses along magnetic field lines. With the flare and CME, the sun's magnetic field has bulged outward here. Ordinarily, it can't be seen. But the glowing plasma acts like a tracer, making it visible. The plasma rains down for almost a full day (which is compressed into about four minutes in the video), until the bulge in the magnetic field dissipates.

SDO images of the sun seen in different wavelengths. (Source: NASA/SDO/Goddard Space Flight Center) Last but not least, a mosaic of solar images showcasing the 13 different wavelengths of light that SDO's instruments can discern. Of course you should never look directly at the sun with the naked eye. Doing so could cause irreparable damage to that wonder of natural engineering — your vision. But the next time that you're out and about on a sunny day, perhaps you can now see — in your mind's eye — all the amazing detail and activity that's ordinarily hidden from us.