Just How Did Mercury Form? 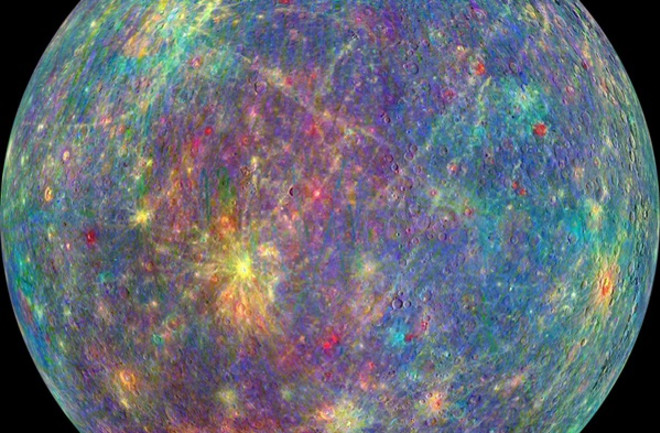 This colorful version of Mercury was assembled from spectral data taken with the MESSENGER spacecraft, highlighting various minerals on the planet's surface. (Credit: NASA/Johns Hopkins University Applied Physics Laboratory/Carnegie Institution of Washington) New data is throwing our theories about Mercury's formation into disarray. Scientists already knew that Mercury looked a bit odd inside. The planet is 60 percent core by volume. Earth is just 15-17 percent core. The crust and mantle on Mercury combined reach only about 250 miles deep into its 1,500 mile radius — Earth’s mantle alone is 1,800 miles thick. Now, new research published in Earth and Planetary Science Letters examines data from NASA’s Mercury orbiter MESSENGER to come to new conclusions about our innermost planet. The planet’s crust may be as much as 25 percent more dense than we’d thought—which could muddy the picture of how Mercury came to be.

One of the more popular theories has been that Mercury was once a much larger planet, but was smashed by early solar system bodies that turned its surface molten, shedding much of the rock. What was left over reformed into the dense planet we see today. Indeed, the inner core of Earth and the core of Mercury are roughly the same radius. Perhaps, then, it was once something around the size of Venus or Earth, rather than starting out life as a planet around the same size as Jupiter’s moons. We already know that there were once more planets in our solar system than there are today—the most recent evidence comes from a meteorite discovery originating from one of these “lost worlds.” Additionally, it’s largely believed that the Moon formed when a protoplanet called Theia collided with the early Earth. A few years ago, researchers even ran a simulation that determined that, yes, Mercury could have formed from a series of collisions between now-lost close-in planets to the Sun. Says planetary scientist and paper co-author Michael Sori of the University of Arizona: “It’s a little bit of a joke in the planetary science community that you can solve anything with giant impacts like that.” Indeed, Sori isn’t convinced, and he has a different hypothesis: Maybe Mercury has just always been this way. "I think there’s a consensus that the Moon was formed by a giant impact,” Sori says. “But I don’t know if there’s that same consensus with Mercury.”

Born to be Wild

When it comes to how they formed, the Moon and Mercury seem oddly alike. Their crusts, however, are a different story. Sori delved into the problem by taking topographic maps of Mercury and adding in density mapping. This gave rough ideas of the actual mass contained within landforms, and a new way of looking at the crust. By understanding the actual features and mapping their density, Sori finally had an idea of how much mass Mercury’s crust contained. All told, it accounted for 7 percent of the mass of the planet—and a lot of the materials involved seem to be similar to what we believe the mantle of Mercury is made out of. It’s also only 16 miles deep, he says, fairly thin. “If you had a mountain on top of a planet that would be extra mass, you would have to balance out by removing mass from the interior, and you do that by bringing that to the crust,” Sori says. That movement makes for a dynamic crust and mantle, and could even raise the possibility of present day geologic activity. Indeed, if mantle material was transported to the crust, that’s a good hint of past or present volcanism—which doesn't line up with the giant impact theories. By looking more closely at the impact basins, Sori determined that they were not consistent at all with a planet that had lost more than half the mantle it once had. The surface is also rich in volatiles. Volatiles are organic compounds or other chemicals like water with low boiling points that should have been eliminated by large scale impact events, yet persist in the polar regions of Mercury as well as certain areas of the surface. This could mean Mercury has also held onto some of its primordial materials. “The chemical evidence we found with MESSENGER data is the ratio of thorium to potassium in Mercury's crust,” says Tom Watters, senior scientist at the National Air and Space museum who studies Mercury, and who wasn't involved with Sori's study. “The ratio is similar to other terrestrial planets and because potassium is a volatile element and it and other volatile elements found would have been lost if a very energetic collision with a young, larger Mercury had vaporized much of the original mantle and crust. Now a much less energetic collision or collisions could be a different story.” So, more evidence against a large collision. But why the big core? The rocks on Mercury are dense—harder than aluminum, according to the paper. What if Mercury was a strange planet from the get-go? “It must have formed from material that was more iron rich than the other four terrestrial bodies,” Sori says, referring to the three other terrestrial planets (Venus, Earth, Mars) and the Moon. Sori couldn’t speculate as to where this material might have come from. But if Mercury were initially made of iron rich materials, it could have formed a large iron core—and the remaining minerals would have separated into the mantle. While there is plenty of iron rich materials in the other terrestrial planets, the materials that formed Mercury would have been dominated by iron and could possibly have formed in a different region of the primordial solar system than the other inner planets. Watters suggests that the gas envelope enshrouding the sun when it was a proto-star could have simply had a higher abundance of iron where Mercury was formed. Sori is careful to point out that MESSENGER, the first spacecraft to orbit Mercury, only really got an in depth view of the northern hemisphere of the planet due to an unusual elliptical orbit. So his findings thus far only apply to the northern half. ESA’s upcoming Bepicolombo mission could provide more answers about the composition and density of the southern half. But for right now, Sori’s finding complicates the picture of Mercury. Maybe it never was bigger—maybe it’s always been right at this size, deepening the mysteries of the innermost planet.