Just After the Big Bang, a Star Factory Went Gangbusters 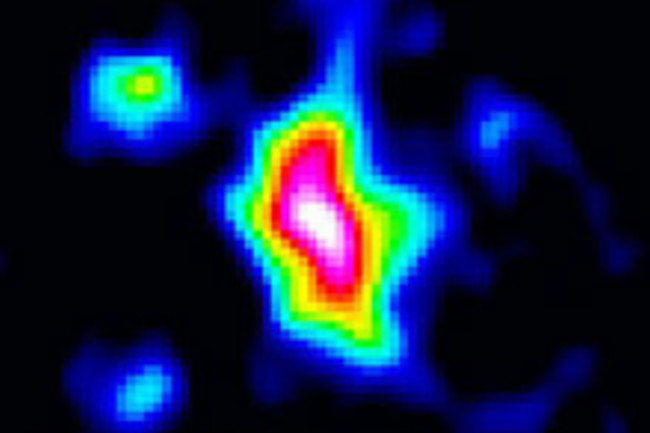 When the universe was young, at least one stellar factory was churning out 1,000 sun-like stars every year, according to a new study. Using an array of telescopes in the French Alps, researchers

carefully scrutinised a distant galaxy whose light has taken so long to reach Earth that it appears as it was just 870 million years after the big bang [New Scientist].

The Milky Way currently forms about one sun per year, says study coauthor Chris Carilli, indicating that massive galaxies may have formed very quickly in the universe's early days.

The immense scale of the stellar factory is probably due to the fact that there was a lot more gas around in the early universe, Carilli says. Matter in the universe was indeed much denser soon after the big bang, since space itself has expanded over time [New Scientist].

The rate of star formation is still limited by several factors, including the blasting winds from newborn stars and the shock waves from supernovas, but this early galaxy was right up against the upper limit.

"The star-forming rate we observed is as high as it gets," said lead author Fabian Walter.... "Physics wouldn't allow a higher star-formation rate" [Cosmos].

Researchers were able to view the ancient galaxy because it contains a quasar, in which superheated material spiraling towards the center of a massive black hole emits enormous amounts of light. Using radio and far-infrared wavelengths, researchers could detect signatures from dust that had been heated by star formation. The researchers' findings, published in Nature [subscription required], also shed light on how galaxies form. The ancient star factory has a dense central region where star formation is concentrated; the team

proposes that the central starburst is the first flicker of what will become a spherical nuclear bulge like the one in the center of the Milky Way, but much larger. Bulges are one of the oldest components of galaxies, older than a galaxy’s spiral arms, for example [Science News].

Related Content: 80beats: Scientists May Have Detected the Death Throes of the Universe’s First Stars 80beats: The First Stars Started Small, Grew Fast, and Died Young DISCOVER: The Man Who Made Stars and Planets DISCOVER: In the Nursery of the Stars