Poor Jupiter. It's breaking out^*. 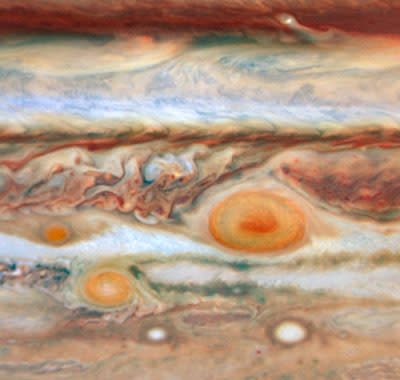 The Great Red Spot is a vast, planet-sized hurricane that's been blowing on Jupiter for hundreds of years. In 2006 it was joined by a smaller storm -- though still thousands of miles across -- called Oval BA (no relation). And now a third red spot has popped up! The third storm (the smaller one in the middle left on the Hubble picture above) was a more normal whitish oval up until recently, when it suddenly turned red. It's unclear why; in general the colors of the storms indicate their chemical composition, and red usually means complex organic compounds. Maybe they were dredged up from deep beneath Jupiter's cloud tops, or maybe the storm gained altitude, high enough that incoming solar ultraviolet light was able to reassemble the molecules into new ones that are red (that's called photolysis, for those keeping track at home). That last idea is supported by the idea that the storm is bright in infrared -- usually, methane in Jupiter's atmosphere absorbs infrared light, so the only way a storm can be bright in IR is for it to rise above most of the methane in the air. That means that if you could see this from the side, it would look like a bump, or a welt, or, well, a pimple rising above the face of Jupiter. But don't be fooled: if transported to Earth, even that small spot would cover most of a hemisphere. Jupiter is monstrously big. It's also a mess. All we can see of Jupiter is the top layers of its atmosphere; but the atmosphere goes down thousands and thousands of kilometers. As the pressure increases with depth the gas turns slowly into liquid; there is no boundary where you can say "here be surface". The tops of the clouds we see are incredibly dynamic. Jupiter spins more than twice as fast as the Earth, and is 11 times the diameter, so the Coriolis effect - which powers the spin of hurricanes on Earth -- is hugely more effective on Jupiter. Also, unlike the Earth which gets most of its heat from the Sun, Jupiter is very warm inside, and so the atmosphere is heated both from above and from below. This makes, obviously, for a messy, messy, world. Understanding Jupiter's complex dynamics will keep atmospheric scientists employed for centuries... probably sponsored by Clearasil.