Jupiter's Galilean Moons May Have Formed Bit By Bit, From Pebbles

These large moons’ complex combination of properties could be best explained if they grew slowly from pebbles. 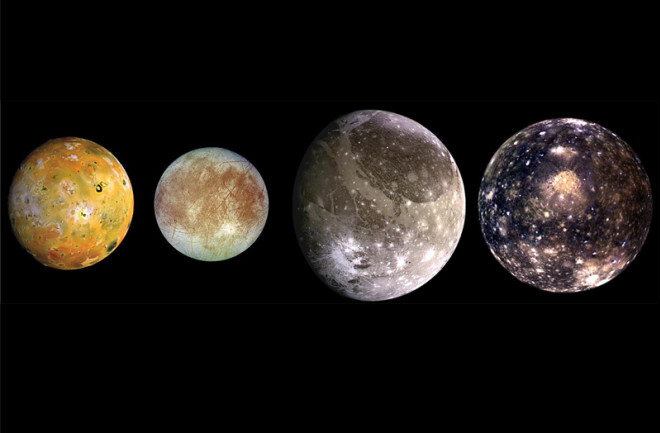 Even in a backyard telescope, the four largest moons of Jupiter are big enough to be seen as little specks of light. And while humans have known about these “Galilean satellites” for centuries, there are still a lot of unanswered questions about how the moons formed.

Now, a team of researchers has proposed a possible history for the moons that better explains more of their properties than other models could. The team suggests that the moons grew slowly by collecting pebbles, rather than larger rocks, from around an early Jupiter.

This process is like a mini version of how astronomers think our entire solar system formed, with worlds growing from pebbles to planets.

And in Jupiter's case, the process can account for the moons’ masses, orbits, ice-to-rock ratios and differences in their internal structures, the researchers report in a recent study published in The Astrophysical Journal.

In general, researchers agree that the four Galilean moons — Io, Europa, Ganymede and Callisto — probably formed from a disk of gas that surrounded Jupiter in its infancy.

But the details of how the moons grew from this disk aren’t yet clear. Based on the properties of the moons they’ve observed and their knowledge of how disks like these behave, scientists try to paint a picture of what the objects’ history might have been.

Most of the previous models of the Galilean moons’ formation considered how some of the largest rocky bodies in the disk, called planetesimals, might collect chunks of rock nearly a mile wide to grow. But the disk probably wouldn’t have made many rocks that big, because solid particles tend to drift inward. So, most would have been swallowed up by Jupiter before they had a chance to gather together and grow larger.

A group of researchers led by Yuhito Shibaike, a planetary scientist at the University of Bern, tested another idea. They calculated what could happen to planetesimals in the disk around Jupiter if they grew by collecting pebbles just a few inches or so in size instead. They found that this slow, pebble-by-pebble way of growing moons can lead to the properties we see in the Galilean satellites today, like the fact that Europa is only a few percent ice by weight, while Ganymede and Callisto are close to half rock and half ice.

“The importance of satellite formation theory, including our model, is getting larger and larger,” wrote Shibaike in an email.

Shibaike says that exploring theories of how moons form will be important for future research. The European Space Agency's upcoming JUICE (JUpiter ICy moons Explorer) spacecraft is set to study the Galilean moons in great detail. And astronomers are starting to search for and understand “exomoons” — the moons that orbit planets outside our solar system.

Shibaike says theoretical models will have to be the bases of these research projects.