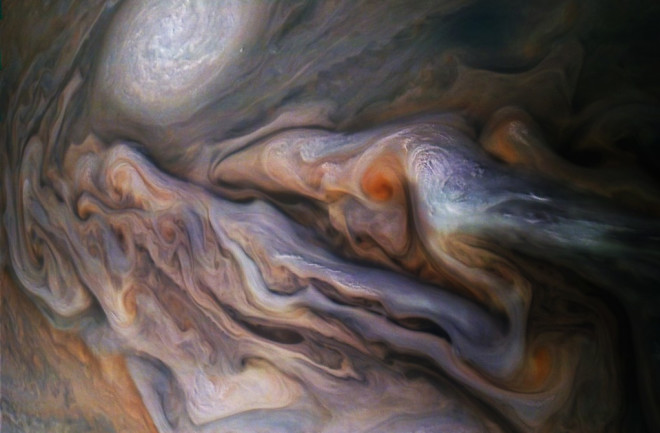 NASA’s solar-powered Juno spacecraft is about to fly past Jupiter yet again to gather more data on the gas giant.

With this 16th flyby, the Juno mission will have observed the entire planet, Jack Connerney, the mission’s deputy principal investigator, said in a NASA statement. Moving forward after this milestone, the craft will provide observations and measurements about the planet in greater clarity and detail.

“Over the second half of our prime mission — science flybys 17 through 32 — we will split the difference, flying exactly halfway between each previous orbit. This will provide coverage of the planet every 11.25 degrees of longitude, providing a more detailed picture of what makes the whole of Jupiter tick,” Connerney said.

Juno has so far been in an elliptical orbit that takes it around Jupiter every 53 days. The craft initially arrived at the planet on July 4, 2016, and has been gathering scientific data since August of that same year. In the flybys that Juno has so far completed, the craft has used the scientific instruments on board to study the planet beneath its swirling clouds. Juno continues to explore Jupiter’s atmosphere, magnetosphere, and interior structure, and collect data about its auroras to better understand how the planet formed and evolved.

Juno has so far made a number of groundbreaking discoveries about this gas giant. Among other findings, the spacecraft found that Jupiter’s jet streams are like nothing we see on Earth, and help to give the planet its distinctive stripes. The craft has also studied the water content of the planet using a microwave radiometer to peer into the planet’s atmosphere. By measuring how much water is held there, researchers can better understand how much oxygen is on the planet, which further informs studies about how the planet formed.

The JunoCam imager also continues to serve an important, dual purpose in this mission. The imager makes Jupiter’s beauty accessible to the general public by capturing the gas giant in all its glory, though it’s not just for aesthetic purposes. JunoCam has also been important for scientists. Time-lapse sequences taken with the imager have allowed researchers to better study dynamic activity on the planet.

Other instruments aboard the craft have also given researchers a much better glimpse beneath the planet’s surface. Brand new images of a tangled magnetic field driven by a powerful dynamo and a host of dancing cyclones are allowing researchers to build towards a more comprehensive model of the gas giant’s interior.

“We have already rewritten the textbooks on how Jupiter’s atmosphere works, and on the complexity and asymmetry of its magnetic field. The second half should provide the detail that we can use to refine our understanding of the depth of Jupiter’s zonal winds, the generation of its magnetic field and the structure and evolution of its interior,” Scott Bolton, principal investigator of Juno, said about the future of the mission.

After Juno completes its mission, the spacecraft will leave Jupiter’s orbit in a controlled manner and disintegrate into the planet’s atmosphere. It is possible, however, that certain instruments on board the craft may fail before this point because of the high levels of radiation emanating from the planet’s magnetosphere.