Juno Sends Back Its First Image of Jupiter 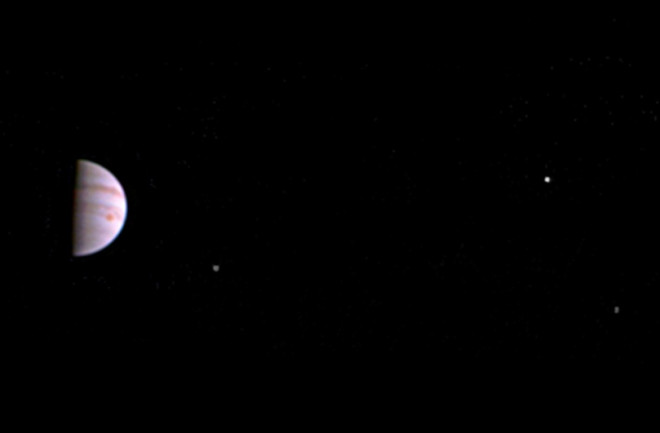 (Credit: NASA/JPL-Caltech/SwRI/MSSS)  On July 4, space enthusiasts awaited word that the Juno probe had entered orbit around Jupiter. The journey was perilous, as the craft was going incredibly fast. Once that was done, it turned its solar panels towards the sun and began its first orbit. Now, a safe distance from Jupiter has been attained and the system is slowly coming online, giving NASA its first photo opportunity since it made its own jovian fireworks.NASA says high resolution images are still a few weeks away, but this is still quite a lovely view, with Jupiter and three of its four large moons in view. Io, Europa, and Ganymede are all accounted for, though Callisto is out of view in the picture. This image was snapped on July 10, just a week short of its orbital insertion. Of course, there won't be much chance to study the moons. The main goal of the mission is a series of close encounters with Jupiter to study its magnetic fields, radiation belts, and other energy output, as well as studying its atmosphere and trying to determine the nature of Jupiter's core in order to better understand how it (and, in turn, our solar system) formed. Enjoy the JunoCam images while you can. The camera is only expected to survive eight of the craft's 37 orbits.