Journey Through the Center of the Earth

A student calculates a more realistic answer to a classic physics homework problem. 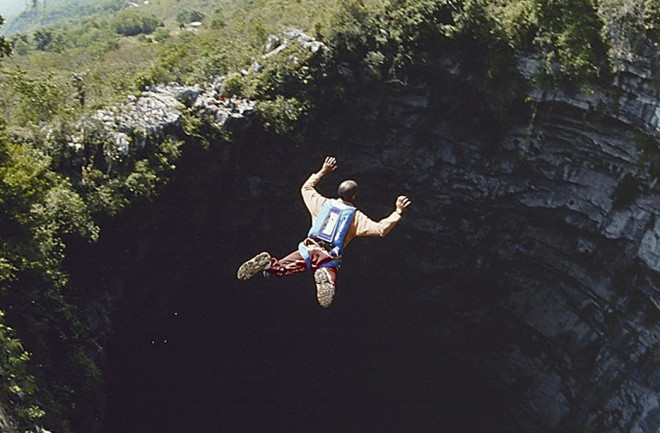 If Mexico’s Cave of the Swallows cut through Earth, classic physics says that if you dove in, it would take about 42 minutes to pop out the other end. A new approach shortens that trip. (Credit: Omer Mei-Dan)

Imagine drilling a hole through Earth, hopping on a train powered by gravity alone and traveling through from one end to the other. How long would you spend on that “gravity train” before popping out on the other side?

It’s a question physics professors have been asking students for decades, and they always expect the same answer: 42 minutes, 12 seconds. One graduate student claims to have shaved a few minutes off that traditional travel time. In Science Smackdown, we let a prof and the grad student duke it out.

Earth’s Density Is Equal All the Way Through

In 1966, physicist Paul Cooper calculated how long the train would spend falling from one side of Earth to the other. People have been thinking about this hypothetical scenario — pondering the motion of mass inside Earth — since Robert Hooke first proposed an earlier, pre-train version of it to Isaac Newton in the 17th century, says Purdue University mathematician Alexandre Eremenko.

The traditional solution, based on Cooper’s calculation, simplifies things by pretending Earth is equally dense from crust to core. At the beginning of the ride, gravity is strongest, speeding the train along. As the train descends, gravity will decrease by the same amount for every mile the train falls. At the halfway point at the core, gravity is lowest and begins to act as a brake, slowing the train as it approaches the destination.

Gravity Is the Same All the Way Through

Alex Klotz, a doctoral student at the time and now a postdoctoral researcher at MIT, doesn’t buy that answer. “I remember just looking at a graph of what the inside of the Earth is like in terms of density and trying to figure out how that would affect the time it takes to fall,” he says.

The crust, where we live, is much less dense than the mantle below, which is less dense than the core. When he considered Earth’s true composition, and the varying accelerations this composition created, Klotz found the train’s trip takes just 38 minutes. But, more interestingly, he could also get this new result by ditching density and making his own simplification: Gravity stays constant the whole trip. It works because gravity doesn’t change drastically until the train gets halfway to the core. At that point, the contraption is moving so fast that the seconds spent near the center hardly matter. So by this reasoning, Klotz says, the gravity train needs an updated schedule.