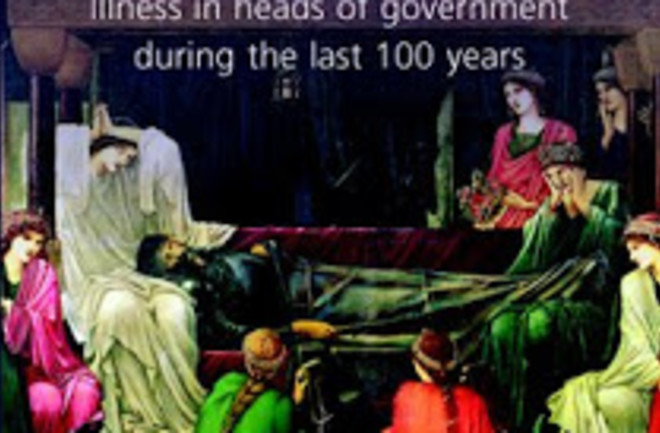 In his book In Sickness and In Power, the former British politician and doctor David Owen (sorry – Lord Owen) discusses the physical and mental health of various 20th century leaders.(*) The chapter on John F. Kennedy is extremely interesting. The most popular President of the century was both seriously ill and a big drug user.

Although he denied it at the time, to the point of lying, it’s now known that Kennedy suffered from Addison’s disease, a serious chronic condition leading to a lack of the steroid hormone cortisol, and in his case, also of thyroid hormone. As a result he required daily hormone treatments of cortisone , tri-iodothyronine and testosterone to stay alive. Kennedy also suffered from several other health problems such as chronic back pain following a World War 2 injury (his boat was rammed by a Japanese submarine and sank), and came close to death at least twice.

This is quite interesting in itself, but especially so since both cortisone and testosterone can alter mood and behaviour. In high doses, cortisone can produce mood swings, agitation and mania, and with prolonged use, depression; while testosterone… well, it’s testosterone. In theory, Kennedy only needed to take enough of these hormones to achieve normal levels, but in fact, Owen says, for long periods of his Presidency he was taking much more than that, partly because doctors in the 1960s tended to use higher doses than would now be considered wise, and partly because he was being simultanously treated by a number of doctors who didn’t always know what the others were doing (seriously.) Allegedly, some photos of Kennedy show symptoms of excessive cortisol levels (“Cushingoid features”) such as a puffy face, although I haven’t checked this. (This picture shows signs of Addison’s disease – low weight and dark skin – before he was treated).

Most interestingly for drug fans, Owen says that Kennedy was a regular user of amphetamine (“speed”), which he was given by Dr Max “Dr Feelgood” Jacobson, who was essentially a high-class quack, although a very popular one. Jacobson was a methamphetamine user himself and he was eventually banned from practicing medicine in 1975. Jacobson gave Kennedy injections of amphetamine and steroids, and probably also gave him vials of drugs to inject himself with; on at least one occasion he probably gave him methamphetamine. All of this was perfectly legal, but it was medically unnecessary, and maybe downright dangerous. Kennedy also had injections of Demerol (pethidine) for chronic back pain, a powerful painkiller which pharmacologically is rather like a cross between morphine and cocaine. Fun stuff. Jacobson, however, disappoved of this.

Owen speculates that Kennedy’s medication, as well as his general health, contributed to his erratic performance during the first half of his presidency – hence the Bay of Pigs fiasco, and an embarrasingly poor form during a summit with the Soviet leader Khrushchev. Later on, when Kennedy’s health situation had improved and he had cut back on the speed and steroids, he was able to handle the Cuban Missile Crisis very effectively and, probably, saved the world. A skeptic would say that Kennedy might have just learned from his mistakes of course, but Owen’s theory is certainly possible, and it’s worth bearing in mind when thinking about the possibility of the widespread use of "cognitive enhancers" – most of these drugs are stimulants with effects on mood and judgement. So remember – unless you want to preside over an abortive, ill-planned invasion of a small third-world country, keep away from speed.

(*)Mini-book-review: In Sickness and in Power is interesting but badly flawed; it mixes sound history with fluffy speculation seemingly at random. Would French President Mitterand have acted differently on the War in Yugoslavia if he hadn’t had cancer? Would the Shah of Iran have been forced to step down earlier if he had admitted to having leukemia? Possibly – but we really don’t know. Owen spends a lot of time wondering about such hypothetical questions. He has also invented a new psychiatric diagnosis, “hubris syndrome”, complete with a DSM-IV style symptom checklist, with which he proceeds to diagnose people like Tony Blair and George Bush on the basis that they made bad decisions about Iraq. Fair enough, but I’ve have preferred to hear more about Nixon and Bush’s alcoholism or about Winston Churchill’s depression, which are discussed, but only briefly.