Japan's Spacecraft Misses Venus, but Gets Another Chance—in 6 Years 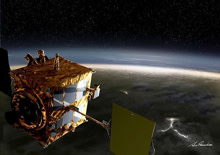 , the Japanese spacecraft's operators were waiting with fingers crossed, hoping their $300 million baby could still successfully enter orbit of Venus even after things started to go wrong. Overnight our time, the bad news came in: Akatsuki missed the target, and won't have another shot at it for six more years. Things first started to get hairy when Akatsuki, after traveling more than six months to the second planet, lost contact with Earth for longer than expected—an hour and a half as opposed to the 22 minutes it was supposed to be out of reach as it passed behind the planet.

When we left Akatsuki last night

JAXA scientists managed to re-establish communication with the spacecraft, the newspaper Japan Today reported. But during a press conference Tuesday (Dec. 7), JAXA officials said Akatsuki sped past Venus, failing to insert into orbit, according to Japan Today. "I'm sorry that we failed to meet the expectations of the public," Japan Today quoted Masato Nakamura, Akatsuki project manager, as saying during the press conference. [Space.com]

Having made their apologies, the Akatsuki

researchers are investigating exactly how the craft faltered

. And they're beginning the long wait for another chance—in six years the craft should have another shot at entering orbit.

If it misses the next window in six years, Akatsuki, which was launched into space May 20, risks entering the same graveyard as its predecessor Nozomi, the Japanese spacecraft launched in 1998 to explore Mars. The probe was put to rest after five years riddled with technical problems. [Wall Street Journal]

80beats: How Japan’s Success Reinvigorated Solar Sailing—and What Comes Next

80beats: Volcanoes on Venus Could be Alive & Ready to Erupt