Japan's Hayabusa 2 Mission Will Mine an Asteroid This Week 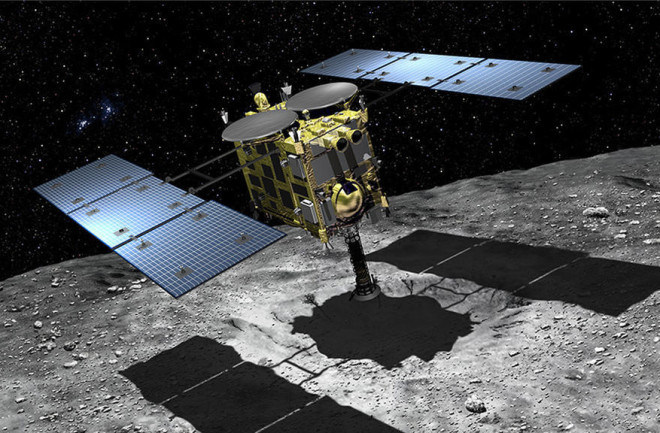 Hayabusa 2 will collect samples from the surface of asteroid Ryugu later this week. (Credit: Illustration by Akihiro Ikeshita (C), JAXA)

The Japanese spacecraft Hayabusa 2 is ready to touch down on asteroid Ryugu and should do so later this week. On Monday morning, Japanese officials confirmed that the spacecraft will attempt to land at 6 p.m. EST on Thursday, Feb. 21. The spacecraft has been in orbit around Ryugu since June of 2018. Once it reaches the surface, it will start its main mission of collecting samples from Ryugu’s surface. Eventually, it will return those samples to Earth for study.

Originally, the lander had planned to touch down as early as last October. But closer inspection of the asteroid showed it was covered in large boulders and rocks. That complicated Hayabusa 2’s task of gathering powder and sand-sized grains. Mission scientists realized they needed more time to scout out safe landing sites where the spacecraft would have a better chance of successfully collecting material from the surface. Now, they’re now confident they have such a spot picked out.

Hayabusa 2 will use much the same method as its predecessor, Hayabusa 1, which visited asteroid Itokawa in 2005. This means shooting a small projectile into the asteroid’s surface, which will throw up dust and small grains that Hayabusa 2 will collect with its sampling horn.

Hayabusa will perform this shot twice, to make sure it grabs enough material for scientists to study. Later this year, it will also shoot a larger projectile from a bigger distance in order to stir up material from below Ryugu’s surface.

Also exploring Ryugu are a series of landers that Hayabusa 2 carried with it. It deployed two of those rovers, HIBOU and OWL, in September. MASCOT landed a few weeks later, in October, and Rover-2 is scheduled for July of this year. All the rovers are capable of hopping around the asteroid to change position and study the asteroid from multiple positions. They’ve been sending back valuable information that has helped scientists pick good locations for future study, and better understand Hayabusa 2’s temporary home.

Hayabusa 2 will depart Ryugu for good in December and return to Earth a year later, in late 2020.