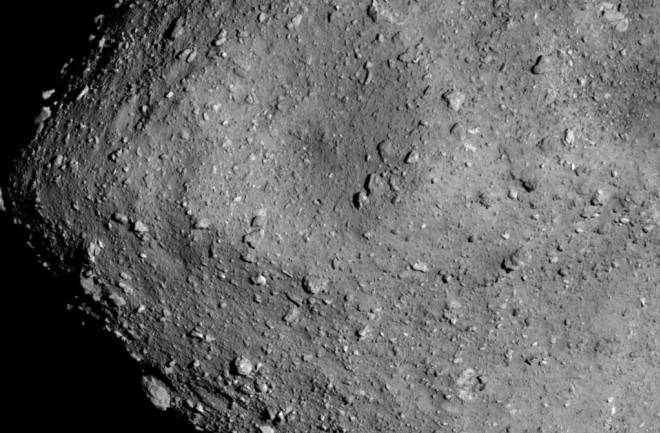 No one mineral dominates the surface of Ryugu, so scientists are still trying to determine its composition. (Credit: JAXA) Back in June, Japan's Hayabusa2 mission arrived at the asteroid Ryugu, a near-Earth object that crosses our home world's orbit. The spacecraft will touch down on the surface in October. But first, scientists must find the most "pristine" location possible – the spot least weathered by the hazards of outer space. One Hayabusa2’s main goals is to return a sample of Ryugu back to Earth in 2020. Scientists are interested in asteroid samples because they provide a close-up view of how the solar system used to be, billions of years ago. The solar system used to be made up of many such small bodies. But over many millions of years, these tiny worlds coalesced into the sun, planets and moons we see today.

The team is considering seven landing sites, but finding the pristine material they’re looking for will be a challenge. "The space environment is not kind, whether it bombards the surface through micrometeorites, the solar wind or thermal cycling," says Hayabusa2 science team member Deborah Domingue, who’s also a senior scientist at the Planetary Science Institute in Arizona. Thermal cycling refers to how a rock contracts and expands as it gets closer to or further from the sun, she explained, which also affects how the minerals inside the rock flex. Composition isn't the only challenge; Hayabusa2 will also need a clear area to land, with few boulders. That's because Hayabusa2 – a "bold mission", in Domingue's words – will need to swoop down from its hovering position over Ryugu, scoop up the surface regolith and then bounce back up again. In fact, Hayabusa2 is scheduled for three touchdowns during its mission. The spacecraft is already doing practice runs for the landing. Since Hayabusa2's arrival on June 27, the spacecraft varied its altitude between 0.5 miles and 12.5 miles above Ryugu, according to mission manager Makoto Yoshikawa of the Japanese Aerospace Exploration Agency. These different altitudes also allow for science observations from up close and afar, such as measuring Ryugu's gravity. Yoshikawa said the mission is already revealing surprises, particularly in terms of the asteroid's shape.

"Ryugu has a spinning-top shape," he says. "This is totally unexpected, because the spin period of Ryugu is not so short. We know that several asteroids have such shape, but for all of them the spin period is short, two hours to four hours [long]. The spin period of Ryugu is 7.6 hours, so it is rather strange." The team is also gathering data by spectroscopy (which shows the asteroid's composition) in visible wavelengths, as well as the near-infrared; this work is still being analyzed. And Domingue says there’s another challenge: No one mineral dominates Ryugu's composition. That makes it hard to say what the asteroid is made of without more observations, she says. In the coming weeks, Hayabusa2's team will select the touchdown site. This site is also where the spacecraft will deploy mini-rovers called MASCOT and MINERVA-II. But in the meantime, Hayabusa2 will watch the asteroid from an altitude of roughly 12.5 miles, moving in different directions as needed to collect information. The spacecraft is equipped with a laser altimeter, an optical navigation camera, a spectrometer and a thermal infrared imager. The Japanese spacecraft is a follow-on to Hayabusa, a seven-year mission that visited asteroid 25143 Itokawa and returned samples to Earth in 2010. NASA currently has its own asteroid-sampling mission in flight, called OSIRIS-REx (Origins, Spectral Interpretation, Resource Identification, Security, Regolith Explorer). NASA's spacecraft will arrive at asteroid 101955 Bennu in December.