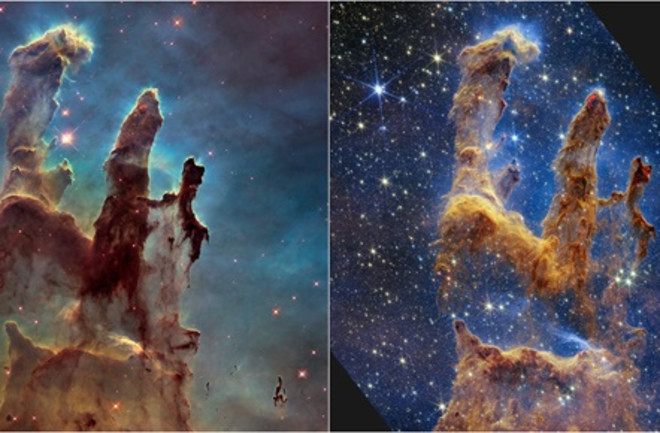 The Hubble Space Telescope's view of the Pillars of Creation (left) in the Eagle Nebula reveals details about the plentiful dust in and around the iconic object. Meanwhile, the James Webb Space Telescope's near-infrared image of the Pillars of Creation (right) largely cuts through that visible-light-obscuring dust, revealing numerous young red stars embedded within the Pillars. (Credit: NASA, ESA, CSA, STScI; J. DePasquale, A. Koekemoer, A. Pagan (STScI))

NASA’s James Webb Space Telescope (JWST) recently captured a new, near-infrared view of one of the Hubble Space Telescope’s most iconic targets: the Pillars of Creation.

Due to copious dust, the outstretched fingers of this cosmic hand appear thick and impenetrable in previous images captured by the Hubble Space Telescope. But thanks to JWST’s infrared sight, which readily cuts through opaque space dust, Webb’s new view of the Pillars reveals myriad red stars that are still in the process of forming.

You’ll also notice that the Pillars themselves are not the only features that appear more translucent in the JWST image. The background sky around the Pillars, which also sports copious dust (albeit less of it), takes on a particularly clear and crisp look in the James Webb shot.

The Pillars of Creation is just one small feature found within the larger Eagle Nebula, a vast star-forming region some 6,500 light-years from Earth. The Eagle is a glowing red cloud of ionized hydrogen and opaque cosmic dust that formed from a star that exploded some 5.5 million years ago.

Since its birth, the Eagle Nebula has helped hatch more than 8,000 new stars. And thanks to JWST, we now have an unprecedented view of the cosmic chicks that call the Pillars of Creation home.