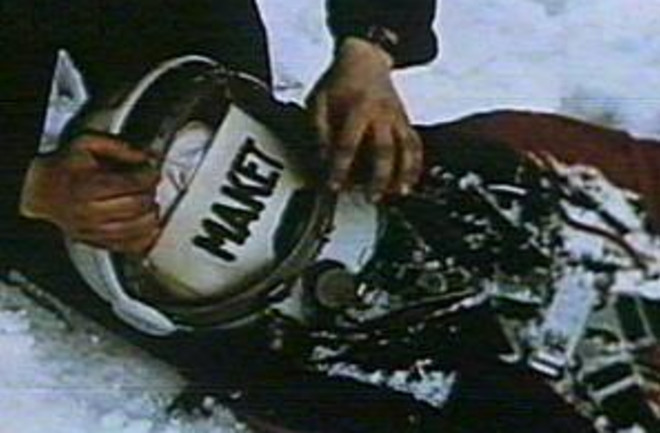 Ivan Ivanovich's face obscured by the sign proclaiming him a dummy. via Astronautix The countryside near Perm in the Soviet Union was rocketed by what sounded like an explosion in the afternoon of March 25, 1961. A capsule was falling from the sky, and before it hit the ground an ejection seat shot out, sending a passenger to a soft landing not far away. When recovery crews and volunteer helpers finally reached the landing site they rushed to the lifeless figure lying on the snowy ground, eyes wide open staring at nothing in the distance. One man punched the body in the face. It wasn’t a man at all. It was a humanoid dummy named Ivan Ivanovich.  The first months of 1961 were arguably the closest point in the space race, as the Americans and the Soviets took incredible strides to send the first man into space. In the United States, these final steps were unmanned Mercury flight designed to test every element of the booster and spacecraft. On January 31, 1961, NASA’s Mercury-Redstone 2 flight put Ham the chimp on a suborbital flight 157 miles high. He survived but the Redstone burned its fuel too fast and developed an oscillating "pogo" motion. The astronauts argued that while it wouldn’t feel great to pogo on launch it was certainly survivable, but the rocket's chief engineer Wernher von Braun demanded one more unmanned test to make sure. The MR-BD flight -- signifying it was a Mercury Redstone Booster Development test and not one of the spacecraft -- launched successfully on March 24, 1961. This cleared the way for NASA's first manned mission. Meanwhile in the Soviet Union, the Korabl-Sputnik launches known simply as the Sputnik series in the west were taking the final steps towards launching a cosmonaut. Like the unmanned Mercury missions, these flights were designed to make sure every element of the Vostok 3A spacecraft as well as the R-7 rocket that would launch it was man-rated. The tests were important enough that engineers and high ranking officials from the Soviet Strategic Missile forces left Moscow for Leninsk, a city near the launch site of Tyura-Tam. Part of testing the Vostok spacecraft was testing its life support system as well as gathering data on what spaceflight would do to a biological payload. As such, beginning with Korabl-Sputnik 4, the capsules didn't launch empty. Korabl-Sputnik 4 carried a small mutt rescued from the streets of moscow named Chernushka (or “Blackie") on board along with 40 black mice, 40 white mice, guinea pigs, reptiles, plant seeds, human blood samples, human cancer cells, micro-organisms, bacteria, and fermentation samples. There was also an occupant in the pilot’s seat, dressed in a flight suit and strapped in for good measure. It was the humanoid dummy named Ivan Ivanovich, the Russian equivalent to John Doe. Surrounding by animals and biomedical samples and wearing a white sheath under a full Sokol space suit, Ivan Ivanovich launched on March 9, 1961. The mission was a success with Ivanovich doing everything a cosmonaut would: acting as a passenger in flight before ejecting just prior to landing and touching down via personal parachute. The animals landed with the spacecraft some 165 miles away. Ivan flew again on March 25 as the “pilot” of Korabl-Sputnik 5, known as Sputnik 10 in the West. This time he had a new head -- the original was damaged during parachute exercises -- and to prevent any confusion should a civilian find him in the forest after landing, the word MAKET (Russian for dummy) was painted on his back and also written on a card wedged in his helmet covering his face. He again flew with a canine companion, another mutt from the streets named Zvezdochka (or “Little Star”), as well as another menagerie of smaller animals and biological samples. He also had a voice of sorts this time. Part of man-rating the spacecraft was making sure the communications link to the ground was up and running. The simplest way to test this was via an onboard recording, in this case a recording of the Piatnitsky Choir followed by a spoken recipe for cabbage soup. It was an innocuous enough selection should western observers pick up the broadcast. As Ivan's second launch countdown progressed, both Yuri Gagarin and Gherman Titov went through pre-launch checkouts — it was a dress rehearsal for them as it was for the launch crews. At 8:54 in the morning Moscow time Ivan Ivanovich left the Earth a second time with Gagarin looking on imagining himself riding the rocket into space. It was another successful mission, again returning to Earth after one orbit. Ivan Ivanovich ejected to land safely in feet of snow, so much so that recovery crews had to wait a full day before they were able to reach him with the help of villagers consenting to carry them on horse drawn sleds. When they did, passers by were alarmed and disconcerted at the apparent lack of concern this crew felt for their fellow man. Most Russians didn’t know anything about spaceflight, and on the heels of Gary Powers being shot down there was concern that this was another American spy, still a man in need of help and not getting any. One of the rescue team members pointed to the “maket” sign in his face and a brave crowd member went up and poked Ivan’s rubbery “skin" to be sure it wasn't a dead human. Ivan Ivanovich's flights cleared the way for manned missions. Up next was Yuri Gagarin, the first human to orbit the Earth on April 12, 1961. The mission was weeks after Al Shepard could have flown on the MR-BD mission. As for the weird myths and stories of phantom cosmonauts... well, Ivanovich might have played into them as well. [embed]https://www.youtube.com/watch?v=Xmmi1pbtybw[/embed] Sources: Air and Space Magazine, NSSDC; The First Soviet Cosmonaut Team by Colin Burgess and Rex Hall.