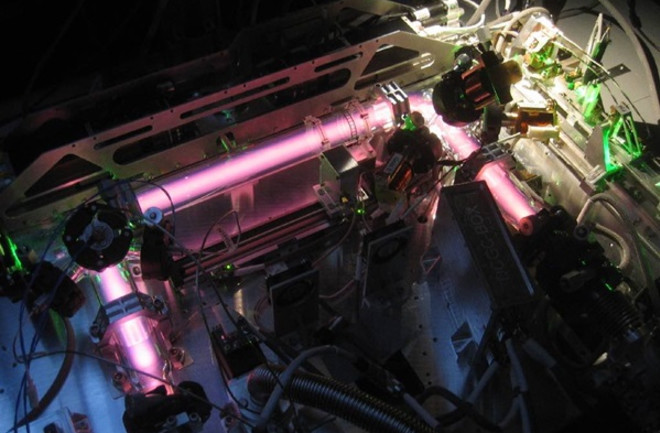 As part of the PK-4 experiment, tiny spherical particles are suspended in a low-temperature plasma (purple) so researchers can monitor have they behave in a charged microgravity environment. (Credit:Max Planck Institute for Extraterrestrial Physics/M. Kretschmer) Dust is omnipresent throughout homes and offices around the world. But now, scientists are intentionally bringing the mildly inconvenient nuisance all the way up to the International Space Station to study how dust grains arrange themselves in a microgravity environment. As part of the Plasma Kristall-4 (PK-4) experimenthttps://www.eurekalert.org/pub_releases/2018-11/aps-uo110218.php — a joint collaboration between the European Space Agency (ESA) and the Russian Federal Space Agency (Roscosmos), with additional involvement from a number of U.S. research groups — scientists are studying how tiny, spherical particles about one-tenth the width of a human hair interact with one another when they become electrically charged within a low-temperature plasma. On Earth, experiments show electrically charged dust particles usually line up either parallel or perpendicular to the downward pull of gravity; however, they do so rather haphazardly, as the grains tend to bounce randomly off one another. But when scientist from Baylor University’s Center for Astrophysics, Space Physics, and Engineering Research (CASPER) carried out a similar experiment in microgravity some 250 miles (400 kilometers) above Earth, they found that electrically charged dust grains in space tend to show a surprising amount of order. “Gravity on Earth is at least as strong as the electric forces between the dust grains,” said Truell Hyde, director of CASPER and head of the study, in a press release. Because gravity helps settle the particles, he said, “in microgravity we expected the dust particles to spread out. Instead, we found that the small forces between the dust particles and the atoms in the plasma impose order on the system.” The researchers found that introducing the dust grains to a microgravity environment did not lead to more chaos like they expected. Quite the contrary. They found that the reduced influence of gravity allowed forces within the plasma to arrange the dust particles in relatively straight lines – though the grains did squirm around a bit within these lines. On an atomic scale, intermolecular forces overpower both gravity (which is relatively weak) and turbulent environments (up to a point). And on the grandest scales, gravity plays a pivotal role in the ultimate shape of stars, galaxies, and clusters of galaxies. However, the PK-4 experiment is exploring the middle ground. According to Hyde, “This experiment may help explain how structures form when they are between very small and very large sizes.” Electrically charged dust grains are common throughout space, whether it be around stars, in the interstellar medium, or within planet-forming disks. And by learning how these charged particles arrange themselves within a microgravity plasma, researchers are hoping to better understand the foundational physics that governs their behavior. Such research will ultimately help shed light on a range of astrophysical objects and processes we don’t yet fully understand. So, although the new results from the PK-4 experiment are still a bit abstract, in the long run, they will likely help astronomers better model the physics that govern the movement and distribution of cosmic charged particles. And by doing so, we will ultimately gain a better understanding of how tiny dust grains can help shape the universe.