ISON Fades Quickly, But There's Still Hope It Will Survive 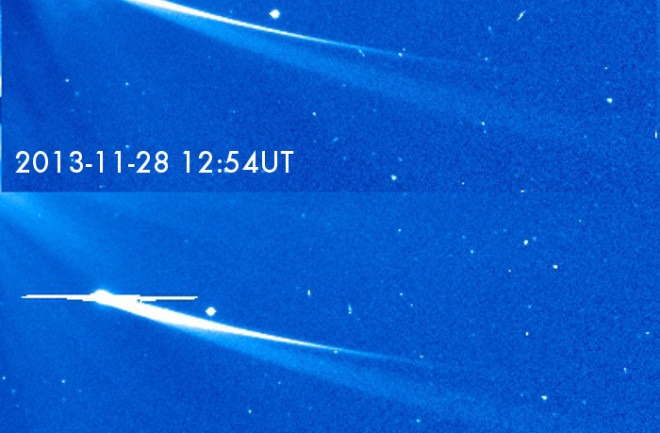 Two views of Comet Ison from NASA's SOHO spacecraft show the comet is fading dramatically. (Source: ESA/NASA, annotations by Karl Battams) | Update 10 a.m. MST: I've added a spectacular video to the bottom of this post showing Comet ISON streaking toward the sun. It's from NASA's SOHO spacecraft. | We're just a few hours from Comet ISON's closest approach to the sun, and the news is not encouraging: The sungrazer has gotten dramatically dimmer, according to Karl Battams of the Comet ISON Observing Campaign. The two images above were captured by NASA's SOHO spacecraft. The bottom image was acquired earlier, the top one later. And the dimming is evident. Based on what he's seeing, Battams says he is not at all confident that ISON will survive intact after perihelion, meaning it's closest approach to the sun, which should occur at 1:44 p.m. EST today:

The question on everyone's lips is "will it survive perihelion?", and now I'm reluctantly thinking it seems very unlikely to survive at this point. I do think it will reach perihelion, and reach the NASA SDO field of view, but based on what I see it doing right now, I will be very surprised to see something of any consequence come out the other side.

But Battams also points out that the comet has "done completely the opposite of what we expect, and it certainly wouldn't be out of character for this dynamic object to again do something remarkable." NASA's SDO spacecraft should be picking up views of ISON very soon. So we should get a new look at what's happening. As soon as images come in, I'll post them. Update: Here's new video from the SOHO spacecraft of the comet approaching the sun: http://www.youtube.com/watch?v=wjqnv3-uWVo The sun is in the central circle. It's blacked out so its glare does not overpower everything else in the image, including massive ejections of material that are evident as the comet approaches. These are called coronal mass ejections, or CMEs, and there appear to be at least two of them. Watch carefully as the comet dives in — it does indeed appear to be dimming considerably.