Interstellar Visitor 'Oumuamua is Probably Not an Alien Solar Sail 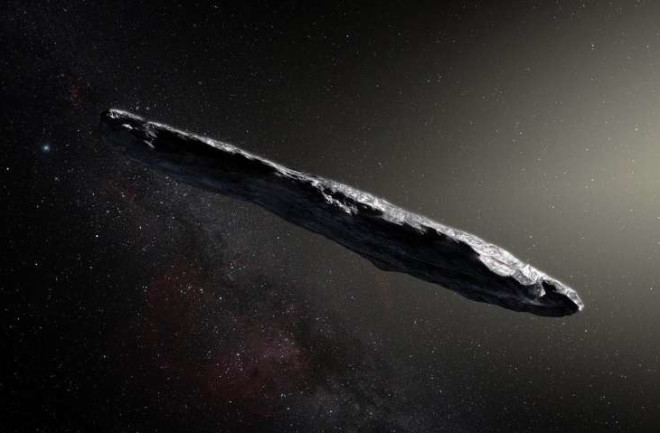 ‘Oumuamua — a curious, cigar-shaped rock — was the first interstellar space rock ever discovered in our solar system, though scientists debate whether it should be classified as an asteroid or comet. Now, a new study suggests that the strange object could actually be an alien light sail, or solar-powered spacecraft.

Abraham Loeb and Shmuel Bialy from the Harvard Smithsonian Center for Astrophysics (CfA) conducted the study, titled “Could Solar Radiation Pressure Explain ‘Oumuamua’s Peculiar Acceleration?” The paper was posted on the preprint website, the arXiv. In it, the astronomers offer a unique, new explanation for some strange behavior ‘Oumuamua has displayed.

The asteroid was first detected by the Pan-STARRS-1 survey in 2017. Astronomers saw it traveling out of our solar system and noted that it was spinning rapidly and likely had a rocky and metallic composition. Further research showed that ‘Oumuamua was also surprisingly icy, despite it not being a comet.

Researchers were in for another surprise when an international team found that the asteroid’s velocity had increased, when they were expecting it to slow down.

That team concluded that, most likely, this was because of a process called outgassing, where material on the object’s surface is heated by the sun and vaporized. This process creates a comet’s tail, and the researchers thought that ‘Oumuamua it could be pushing the object and increasing its velocity.

But Loeb and Bialy have a different, much stranger, explanation for these observations.

The pair has suggested that, alternatively, ‘Oumuamua could be a light sail — a spacecraft that uses radiation pressure to propel itself, a probe like what Breakthrough Starshot is working to create. These researchers suggest that this interstellar craft could have natural origins or, alternatively, that it could have been sent out from an extraterrestrial civilization.

“Its origin could be either natural (in the interstellar medium or proto-planetary disks) or artificial (as a probe sent for a reconnaissance mission into the inner region of the solar system),” Loeb said in a statement.

This artist's illustration shows a light sail traveling toward the potentially habitable exoplanet Proxima b. (Credit: PHL at UPR Arecibo)

This artist’s illustration shows a light sail traveling toward the potentially habitable exoplanet Proxima b. (Credit: PHL at UPR Arecibo)

Researchers have found no heat coming from ‘Oumuamua, and additionally found that the object is cold and reflects light. Light sail spacecraft, theoretically, are pushed forward as they reflect light. So, instead of being heated by the sun, the pair suggests that radiation from the sun pushed the object to accelerate.

For sunlight to explain the object’s acceleration, however, the team found that ‘Oumuamua must be a pancake-shaped object less than a millimeter thick and dozens of feet across. This shape was previously suggested as an explanation for the object’s tumbling and spinning. The pair of researchers also showed how an object of the same size and shape could survive traveling through the Milky Way unharmed by collisions.

In an email, Loeb said it’s possible “the object is a light-sail floating in interstellar space into which the Solar System ran, like a ship bumping into a buoy on the surface of the ocean.”

But, Coryn Bailer-Jones of the Max Planck Institute for Astronomy, who has researched the interstellar object, said that previous research already offers a natural explanation. He points to a study from last year, where astronomers suggested ‘Oumuamua is accelerated by non-gravitational forces. “That is not at all unusual for asteroids or comets in our solar system, and it is often attributed to out-gassing,” Bailer-Jones said.

“We don’t really know what the cause of the acceleration is, but the most likely candidate is probably some kind of comet-like activity,” Bailer-Jones continued, suggesting that an extraterrestrial solar sail is unlikely.

Loeb and Bialy’s new work doesn’t say that aliens must be behind the object, but they do suggest the possibility of extraterrestrial origins. However, Loeb, a well-known astronomer who occasionally studies some far out ideas, says their latest research isn’t some alien conspiracy.

“My approach to the puzzling properties of `Oumuamua is purely scientific and evidence-based. I follow the maxim of Sherlock Holmes: ‘… when you have excluded the impossible, whatever remains, however improbable, must be the truth,’” Loeb said.

“There are also some things which an alien spaceship hypothesis would have to address,” he said. “For example, ‘Oumuamua is tumbling (rotating, but not about any of its main axes). Why send a spacecraft which is doing this? If it were a spacecraft, this tumbling would make it impossible to keep any instruments pointed at the Earth.” He also noted that the behavior could only “theoretically” be explained by an extraterrestrial sail and adding that such a technical, “we can’t actually rule it out” explanation isn’t very useful.