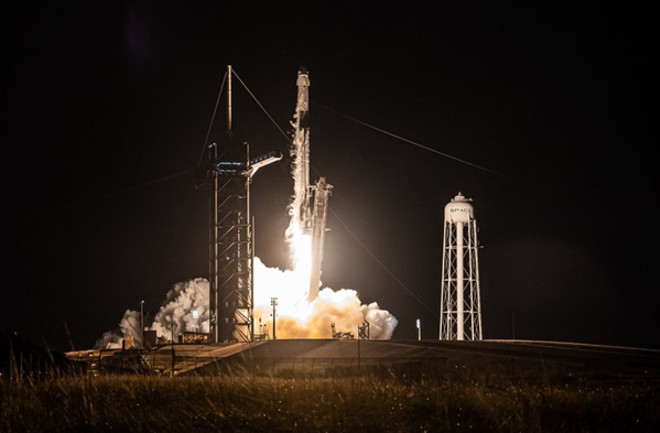 Last night at 8:02 PM EDT, the crew of Inspiration 4 — the first all-civilian spaceflight — blasted off from historic Launch Complex 39A at NASA’s Kennedy Space Center. Tucked inside a SpaceX Crew Dragon capsule, which was lofted to orbit atop a SpaceX Falcon 9 rocket, are four fortunate astronauts: Sian Proctor, Hayley Arceneaux, Christopher Sembroski, and Jared Isaacman. The latter footed the bill for the trip.

Unlike the recent suborbital spaceflights of billionaires carried out this summer by Blue Origin and Virgin Galactic, Inspiration4 is setting its sights higher, taking the untrained civilian crew all the way to orbit. There, they will circle the Earth for three days, conducting experiments and enjoying their views before returning for a soft water landing off the coast of Florida.

Commanding the Inspiration4 mission is Isaacman, founder and Chief Executive Officer of Shift4 Payments. The American billionaire is also a pilot. Proctor earned her seat by winning a contest hosted by Shift4.

Similarly, Sembroski got his seat from a contest, but not one that he won. Instead, his friend won the seat in a charity raffle for St. Jude and, for personal reasons, declined the seat, instead offering it to Sembroski.

Arceneaux was a childhood cancer survivor and former patient at St. Jude who now works at the hospital as a physician's assistant. She will become the youngest American (and the first person with a prosthetic body part) to venture to space. Arceneaux was personally selected by Isaacman to be on the flight.

Also on board are numerous items that will later be auctioned off for St. Jude, including the first minted non-fungible token (NFT) to be played in orbit. Other items include mission jackets decorated with artwork from St. Jude patients, 66 pounds of hops from Samuel Adams that can be used to create out-of-this-world beer, a to-be-autographed copy of Time with the crew on the cover, and much more.

The launch last night went off without a hitch, and it was celebrated with fist bumps by the crew, even as they were still climbing to their final orbital altitude.

Their excitement, however, is warranted. Besides becoming the first all-civilian mission, Inspiration4 will also be the first orbital human space mission to not dock at the ISS since the final Hubble mission in 2009.

At an orbit of 363 miles (585 kilometers), Inspiration4 is now above both the ISS and the Hubble Space Telescope. In fact, the Inspiration4 crew is currently farther from Earth than any humans have been since the Apollo missions.

One more record Inspiration4 launch helped break: the greatest number of people in space at one time. NASA’s Expedition 65 mission currently has a crew of seven people aboard the ISS, while China’s Shenzhou-12 mission includes three astronauts who are concluding a 90-day trip with their return to Earth tomorrow. So for a few brief days, the four civilians of the Inspiration4 crew brings the total space population up to 14, just edging out the previous record of 13 set in 2009.