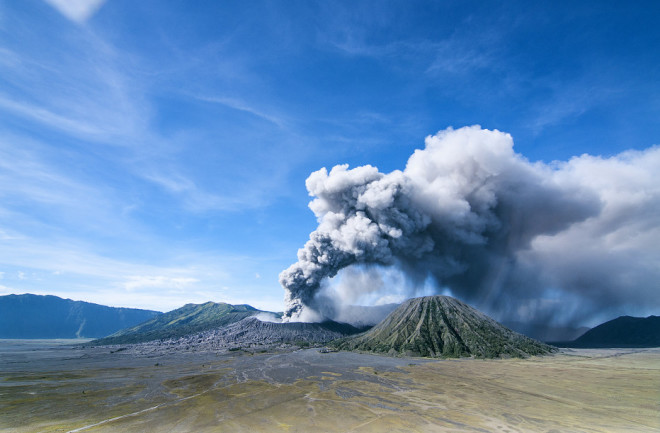 Mount Bromo, East Java in Semeru Tengger National Park, Indonesia during eruption. muslian/Getty Images 2016 has just started and already a couple eruptions are making the headlines. If you haven't yet, check out my 2016 volcano preview. IndonesiaSoputan, on Indonesia's Sulawesi, had a series of explosive eruptions. After a few months of unrest that included white steam plumes from the volcano's crater and slowly increasing seismicity, the volcano produced an explosion that sent ash at least 2 kilometers up (6,500 feet), although some reports had the plume reach as high as 3.6 kilometers (12,000 feet). The eruption also generated a lava flow on the eastern flank of Soputan. You can watch some video of the eruption in this Time article. These explosions caused some air travel delays due to the ash and the PVMBG raised the alert status to 3 (of 4), declaring a 4-km exclusion zone around the volcano. That's significant, as almost 5,000 people live within 5 kilometers of Soputan. This is like a continuation of the activity we've seen at Soputan that started about one year ago.

The brown ash plume from Bromo in the Tengger Caldera, spotted by Terra's MODIS imager on December 26, 2015. NASA Soputan joins Bromo in the Tengger Caldera as an Indonesian volcano capturing some media attention. Eruptions from Bromo closed airports as the calendar turned to 2016. This new activity at Bromo that started in December was the first activity in the Tengger Caldera since 2012. As usual, two dozen of the country's numerous volcanoes are on elevated alert. Guatemala Meanwhile, the heightened activity that started in 2015 at Guatemala's Fuego continued into 2016 with some impressive lava fountains. This eruption was vigorous enough to produce a 7 kilometer (23,000 foot) ash plume and rattle roofs over 30 kilometers (~18 miles) from Fuego. The lava fountain generated flows down the volcano's slopes as well as this RT video shows clearly.