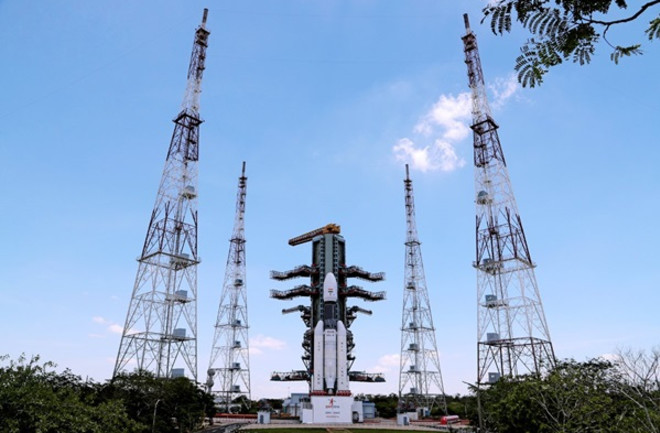 GSLV MkIII-M1 rocket on the launch platform before the launch in India. (Credit: ISRO)

The Indian Space Research Organization’s (ISRO) second moon mission, Chandrayaan-2, launched successfully into Earth orbit on July 22 after a week long delay. The mission ultimately aims to place a lander and a rover on the lunar surface later this fall.

At about 5:18 a.m. EDT, India’s GSLV MkIII-M1 rocket lifted off from the launch platform at the nation’s Satish Dhawan Space Centre. About 16 minutes after the launch, Chandrayaan-2 successfully separated from the launch vehicle to begin its 16-day orbit around Earth before heading off to the moon. The launch was also the first operational flight for the GSLV Mk III.

Originally planned to launch on July 15, the countdown clock was stopped with just 56 minutes to go. With an audience watching around India and the world, the launch was held in the last hour due to a “technical snag.” That initial problem was corrected within 24 hours, according to a press release from ISRO.

The goal of Chandrayaan-2 is to explore the rarely visited south pole region of the moon. The mission will send an orbiter, a lander named Vikram and the Pragyan rover to the moon. The rover will spend 14 Earth days studying the geography and soil of the south pole. The orbiter will continue to study the region for a year.

This will be the first Indian spacecraft to conduct a soft landing on the moon, making India the fourth country to do so behind the United States, Russia (USSR), and China.

Even with the week delay, the targeted landing date near the south pole of the Moon is still September 7, according to the press release.