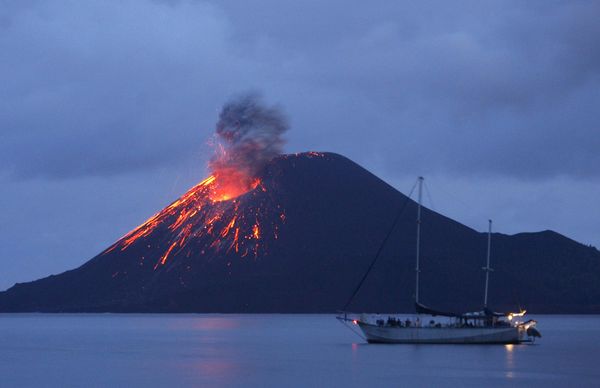 There is a report out tonight that activity might be increasing at Anak Krakatau in Indonesia, however, it is unclear whether it is actually increasing or not. People are evacuating the coastal area of the Sunda Strait to Bandarlampung in fear that a major eruption of the volcano is on the horizon. However, the Volcanology and Geological Disaster Mitigation Center (PVMBG) in Indonesia has not changed the alert status at Anak Krakatau and it remains at 2 of 4 (~Orange Status). The volcano has been erupting almost constantly for the last few years, producing strombolian eruptions and explosions but local residents fears that a perceived increase in eruptions over the last few days could herald something larger.

It is hard to tell exactly what is going on at Anak Krakatau beyond descriptions like these from local fishermen:

"So far it has never emitted such loud blasts and we have been observing that it has often discharged molten lava."

This sort of activity is not unheard of at Anak Krakatau, and the last eruptive cycle that was thought to have ended in August of 2008 produced lava and pyroclastic flows. There are also reports from the Indonesia Weather Service and Qantas pilots of ash as high as 800 m above the vent. Again, nothing too shocking, but apparently the activity has increased enough to cause people in the neighboring regions to become terrified of a potential larger eruption.

This is the crux of the problem when it comes to volcanic mitigation in a populated area: perception versus reality. Anak Krakatau may or may not be experiencing an uptick in activity - from the report, it would seem that it is, at the very least, seeing a small increase - but the people living along the Sunda Strait believe that it is and this belief is driving their behavior. There are no indications (well, none that have been released to the public) that Anak Krakatau might be headed toward a larger eruption, but the memory of previous eruptions and the fear of new activity is still there. Muhammad Hendrasto, the chief of Anak Krakatau's monitoring team, is calling on resident to not panic (good advice). Until more information comes out, it might be time to keep an eye on the child of Krakatau.