In the Milky Way, There Are As Many Planets As Stars 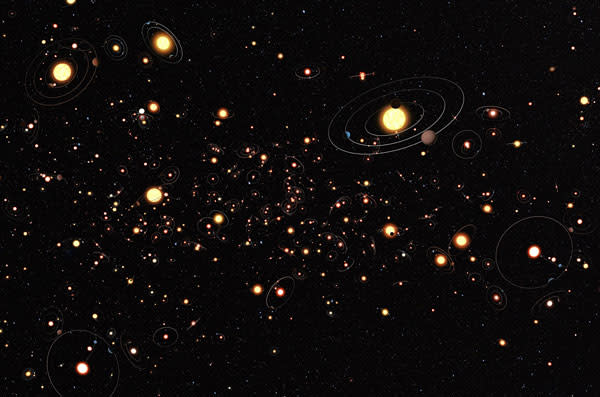 There are at least as many planets in the galaxy as there are stars. And even that is probably a vast underestimate. That's the latest bombshell from astronomers looking for planets beyond our solar system

will have a post on this soon, but for now, here's a little quote salad for you: “Planets are like bunnies; you don’t just get one, you get a bunch,” said Seth Shostak, a senior astronomer at the SETI Institute who was not involved in this research. “So really, the number of planets in the Milky Way is probably like five or 10 times the number of stars. That’s something like a trillion planets.” (via PopSci

) “We think about one-sixth of stars should have a Jupiter-like planet, half have a Neptune-sized planet, and two-thirds should have an Earth,” said Kailash Sahu, an author of the Nature paper

in which this observation was published. (via Wired

[a space telescope devoted to the search for planets] has already been finding that small planets are actually quite ubiquitous around stars," says Scott Gaudi of Ohio State University, who did not contribute to the new research. "That bodes well for our goal of eventually finding an Earth-size planet in the habitable zone. All signs are pointing to the low-mass planets being common, so I think there's a good chance that we'll find a system like that in the coming years." (via Scientific American

) "It just feels like it's inevitable that Kepler is going to come up with a habitable Earth-sized planet in the next couple of years," says John Johnson of Caltech, who presented a related study at the American Astronomical Society meeting this week. (via NYTimes

Image: An artist's representation of how numerous planets are around the stars of the Milky Way. Courtesy of ESO/M. Kornmesser