Elon Musk’s rocket company came through, becoming the first private enterprise to put a human in orbit. The launch also restored America’s ability to launch astronauts from its own soil. 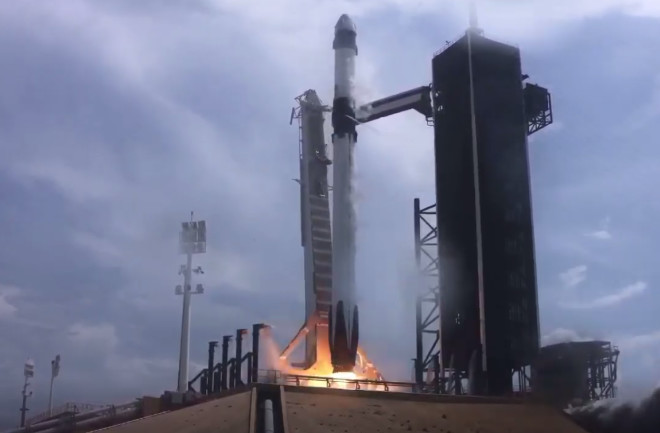 Elon Musk’s rocket company, SpaceX, made history on Saturday when its Crew Dragon capsule safely reached space carrying two NASA astronauts. It was the first time a private company had put a human into orbit.

On Sunday, Crew Dragon went on to successfully dock with the International Space Station (ISS), which the astronauts are now safely aboard.

The historic launch marks the first time NASA astronauts have blasted off from American soil since the Space Shuttle Program ended in 2011.

Appropriately, that final flight of space shuttle Atlantis was piloted by astronaut Douglas Hurley, who commanded Saturday’s Crew Dragon Demo-2 mission. He was accompanied by fellow astronaut Robert Behnken. Together, the two will now spend a yet-to-be-determined amount of time onboard the International Space Station.

For nearly a decade, NASA has bought seats on Russian Soyuz spacecraft to reach the ISS, which, according to some estimates, was built with roughly $200 billion of U.S. taxpayers’ money. And to celebrate the return of crewed U.S. launches, the space agency promoted Saturday’s event as “Launch America.”

“This is a unique opportunity to bring all of America together in one moment in time and say ‘Look at how bright the future is.’ That’s what this launch is all about,” NASA Administrator Jim Bridenstine said at a press briefing earlier in the week.

Roughly 10 million people watched Crew Dragon’s launch online and on television, as the event was livestreamed and carried by all the major TV news networks. In 2019, over 100,000 people had traveled to Cape Canaveral in Florida for the prior, uncrewed demonstration flight. The crowds at the Kennedy Space Center on Saturday were significantly smaller this time around as a result of social distancing restrictions in place due to the COVID-19 pandemic.

Nonetheless, a palpable silence, followed by raucous cheers, rang out at Launchpad 39A as the astronauts reached orbit. The same launch site was used to vault the Apollo missions to the moon and space shuttle flights into orbit.

As Crew Dragon continued into orbit, the rocket boosters from the Falcon 9 launch vehicle landed safely nearby and were retrieved for use in future missions. That reusability has proved to be the key feature that makes SpaceX’s technology cheaper than anything that’s come before it.

“We’re bringing America back, as it relates to human spaceflight,” Bridenstine said at a joint press conference with President Donald Trump. “There was a day when there was grass growing out of the runways [at Kennedy Space Center]. But now we not only have the policy directive from the administration, we also have the budgets to match that policy directive to put America preeminent in space.”

After successfully docking with the ISS on Sunday at 10:16 a.m. EDT, the crew came aboard the orbiting research laboratory. However, it’s not clear exactly when Behnken and Hurley will return to Earth; NASA plans to make that call after the pair’s arrival on the station and after evaluating next opportunities to put astronauts on the ISS. The return trip will also be a pivotal test for Crew Dragon, as the capsule must survive being superheated by Earth’s atmosphere before decreasing its reentry speed even further using a collection of parachutes.

If the mission finishes successfully, it will complete SpaceX’s validation to fly crewed missions to orbit — another first for a private company. It should also allow the company to start flying tourists into orbit in the not-too-distant future.

While this was the first time a private company successfully launched a human into orbit, another American company beat them in being the first to send an astronaut into space. Back in 2004, aerospace engineer Burt Rutan’s SpaceShipOne flew a suborbital trip, crossing the accepted boundary of space called the Karman line — which is at an altitude of 100 miles — and winning the $10 million Ansari XPRIZE. The space plane’s next-generation model, SpaceShipTwo, now operated by Virgin Galactic, also sent two commercial astronauts just beyond the edge of space in 2018.

SpaceX’s path to this success was marked by extreme highs and lows. Musk founded the company in 2002 on the dream of affordable spaceflight — primarily Mars travel. By 2006, after a number of delays, they attempted to launch their Falcon 1 rocket into space from the Marshall Islands carrying a government satellite. The rocket exploded a minute into the trip. It took three more tries before a Falcon 1 rocket delivered a satellite into orbit in 2008, a first for a privately funded rocket.

Next, the company turned its gaze to creating a reusable rocket — one that could be flown, landed and then flown again. That launch vehicle, the Falcon 9, made its first flight in 2010, and these rockets have now flawlessly flown 85 out of 87 missions, landing more than 50 times.

And as SpaceX slowly built a track record of successful flights, they started winning larger and larger NASA contracts. First, the U.S. space agency hired them to carry cargo back and forth to the ISS. And eventually, SpaceX and its larger competitor, Boeing, were hired as part of the agency’s Commercial Crew Program. The idea was to let private companies replace the space shuttle’s services in the aggregate, while NASA focused on other priorities, like reaching deep space.

“We want to establish a commercial environment in low Earth orbit so that we can focus on the hard job of exploring beyond our home planet,” NASA Kennedy Space Center Director Robert Cabana said on Saturday. “We can’t do that if we’re locked here in low Earth orbit. Commercial Crew, with both SpaceX and Boeing, that’s the beginning of a whole new era of spaceflight.”

Rather than buying the spacecraft from SpaceX and running it themselves, as NASA has done for more than half a century, Musk’s engineers would be in charge of building, launching and operating the capsules.

The plan has faced numerous delays, as both SpaceX and Boeing have given vague timelines and repeatedly pushed back test dates.

Cheers rang out at SpaceX’s headquarters as Crew Dragon’s parachutes deployed during a test on May 1, 2020. Shortly after, the capsule splashed down in the Atlantic Ocean, shown here. (Credit: NASA)

Flight of the Dragon

Then, in March of 2019, Crew Dragon sailed flawlessly through its initial, uncrewed demonstration flight to the ISS. The Falcon 9 delivered the capsule into orbit along with its mannequin and cargo, where Crew Dragon ultimately docked with the space station. The reusable rocket boosters even landed back on Earth.

But less than two months later, the Crew Dragon capsule exploded due to a leak and a faulty valve during a test of its “SuperDraco” thrusters, which are meant to propel the capsule away from the rocket in an emergency. The company was forced to miss a targeted July launch for sending a crew into orbit, and SpaceX spent much of the last year proving its spacecraft is safe.

That history of blowing things up reared itself again on the eve of the Crew Dragon’s launch. On Friday, a SpaceX Starship prototype exploded during a static fire test of the spacecraft that the company hopes can carry them into the future, ultimately ferrying humans beyond the space station to the moon and Mars.

However, for NASA, there was also good reason to think Saturday’s Crew Dragon mission would succeed. SpaceX had already flown to the ISS roughly two dozen times using its cargo version of the same capsule, the Cargo Dragon. The two share the same architecture but have significantly different internal blueprints and safety features.

Robert Behnken during a test run of the Crew Dragon ahead of the launch. (Credit: SpaceX/Ashish Sharma)

And in an interesting historical footnote, both men who flew on this first mission are married to other NASA astronauts. Behnken is married to fellow astronaut Megan McArthur, and Hurley is married to Karen Nyberg. All four were selected in the same class of astronauts back in July 2000.

Behnken has a Ph.D. in mechanical engineering and is a U.S. Air Force colonel. He’s flown to space twice before on the space shuttle, once in 2008 and again in 2010. Hurley also flew on the space shuttle twice, in 2009 and 2011, including as the final pilot of space shuttle Atlantis. He too studied engineering in college and joined the U.S. Marine Corps, where he serves as a colonel. Hurley is also no stranger to groundbreaking flights: He was the first Marine to pilot the F/A-18 Hornet fighter jet.

The pair, along with two other veteran astronauts, were named by NASA in 2015 to work with SpaceX on the Crew Dragon missions. So both astronauts know the ship well.

The company currently has two surviving Crew Dragon capsules it can use to ferry astronauts. In addition to its NASA contracts, SpaceX has already been in talks with space tourism companies about bringing tourists to orbit, too. Each ship is designed to hold four NASA astronauts or seven tourists, so humanity’s presence in space should increase in the years ahead.

Actor Tom Cruise could be among the first non-astronauts to take one of those seats. SpaceX and NASA are reportedly in talks about filming an upcoming movie in space.

So, with the scrutiny finally starting to ease on Musk, that attention will now turn to Boeing. The company must successfully test and prove the worth of its Starliner crew-carrying spacecraft, a more expensive rival to the Crew Dragon. However, it’s not clear when Boeing might try again.