In a World First, Physicists Trap Elusive Atoms of Antimatter 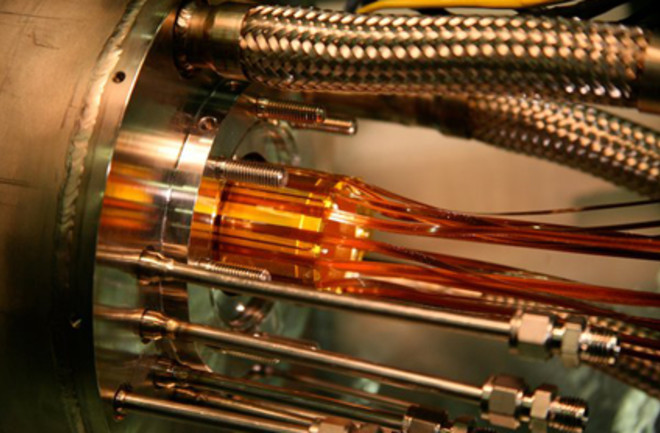 It's a trap! (For antimatter.) Researchers report this week in Nature that they've managed to corral atoms of antimatter in the lab and keep them around for about one-sixth of one second—an eternity in particle physics. The ability to trap these atoms means scientists could soon have the ability to study them directly, and perhaps answer one of the fundamental questions of the universe: Why the matter and antimatter present after the Big Bang didn't annihilate each other completely and leave a matter-less universe behind. Jeffery Hangst led the research team at CERN's ALPHA collaboration.

It's not easy, because of that mutual-annihilation issue. Hangst said the first trick was to combine the particles in a super-cold vacuum setting --- less than 0.5 Kelvin, or -458.8 degrees Fahrenheit. That way, the particles don't instantly jump away and fizzle out. The second trick is to build a magnetic trap to help contain the particles so that they don't instantly decay. And there's a third trick: designing a system capable of verifying that the atoms actually exist. "You must have a trap, and you must be cold, and you must be able to detect that you've done this," Hangst said. [MSNBC]

By merging antiprotons (the antimatter

version of protons) and positrons (the bizzaro electron), Hangst's team created hundreds of thousands of anti-hydrogen atoms, of which they were able to trap a grand total of 38 for a fraction of a second. If the scientists can extend that time, Lawrence Berkeley Lab

physicist Joel Fajans says, they can begin to play around with antimatter and figure out how it personality differs from ordinary matter's, and why we live in a universe dominated by matter rather than its opposite.

"Antimatter seems to have disappeared," Fajans said, "and no one knows why. It's one of the fundamental mysteries of the Big Bang, and now that we know how to store it, we'll soon have enough atoms of antimatter to hold in our hands long enough to study questions like how it behaves in real-world gravity, what its fundamental role was in the evolution of the universe and how it behaves when we excite it with laser beams." [San Francisco Chronicle]

Indeed, it's not every day an entirely new experimental avenue opens up, and other anti-hydrogen experiments are under way at CERN

“It’s so exciting because now we can subject antihydrogen to anything anyone has ever done with hydrogen in the past,” says Hangst. “There are 100-odd years of atomic physics that we can learn how to do again with antiatoms.” [Science News]

Related Content: 80beats: In the Universe's Decisive Battle, Why Did Matter Prevail Over Antimatter?

: The quest to answer the question, "Why do we exist?" Cosmic Variance: Matter v. Antimatter 1: The Baryon Asymmetry