In a Rare Feat, Scientists Anticipate and Recover an Incoming Asteroid 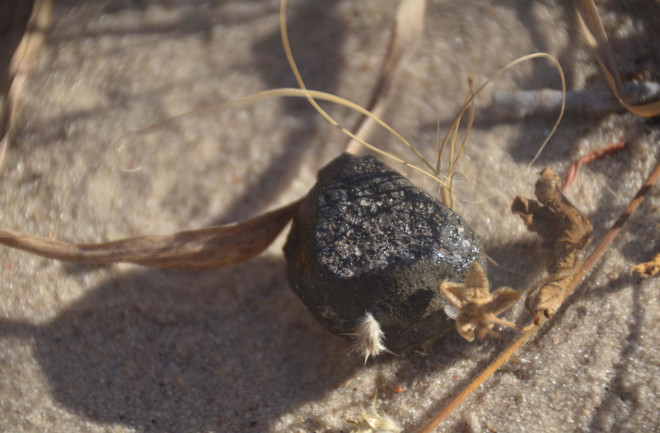 The small meteorite recovered from the impact of asteroid 2018 LA. (Credit: Peter Jenniskens) We have swarms of scientists searching the skies for space oddities, but it's rare that they actually find one in the act of plunging to Earth. On June 23, a group of international geoscientists discovered a meteorite in Botswana that had been dwelling in space just weeks earlier. The fresh fragment broke off of asteroid 2018 LA as it plummeted to Earth on June 2, turning into a fiery meteor and exploding as it entered our atmosphere.

The geoscientists spent five days combing the land beneath the meteor’s impact area before finding the tiny meteorite — marking only the second time remnants from a predicted asteroid impact have been recovered. Since such freshly fallen meteorites are so uncommonly found, researchers now have the rare opportunity to study its properties and composition first-hand. The Catalina Sky Survey in Tucson, a NASA funded Planetary Defense project that locates and tracks near-Earth objects, discovered the asteroid only eight hours before it made impact with Earth. Any potential threat was quickly dismissed, though, when telescope observations deemed it to be just 6 feet (2 meters) in diameter, making it small enough to safely break apart in Earth’s atmosphere. But exactly where the asteroid would strike was still unknown. Researchers were able to loosely estimate impact sites above New Guinea, Southern Africa and the Indian Ocean, but nothing was certain. However, speculation was squashed when a quick, luminous flash in the low sky took multiple Botswana residents and area surveillance cameras by surprise. The unexpected spark turned out to be the blazing asteroid, entering the atmosphere at 10 miles (17 kilometers) per second. Upon impact, the meteor fragmented into numerous pieces and scattered over the vast area below. To find the resulting meteorites, research scientist Peter Jenniskens of California’s SETI Institute, along with Esko Lyytinen and Jarmo Moilanen of the Finnish Fireball Network, used sky survey data and video footage to calculate the landing area and pinpoint its altitude and position in the sky. After five days of searching the calculated region, geologist Lesedi Seitshiro finally came across the surviving meteorite in Botswana's Central Kalahari Game Reserve. And although the meteorite is small in size, its significance is anything but. There were only two prior instances where asteroids were discovered hours before hitting Earth — one being asteroid 2008 TC3, which stretched 13 foot (4 meter) and entered the atmosphere above Northern Sudan in 2008, and the other being asteroid 2014 AA, which crashed over the Atlantic Ocean in 2014. Researchers were only able to locate meteorites from 2008 TC3, making this find just the second such occasion. It may seem like the team has struck gold, but the search is far from over. Geoscientists will continue to hunt for additional meteorites, with hopes of learning more about the celestial objects that circle and sometimes plummet towards Earth. And since the Catalina Sky Survey discovered all three of the above asteroids, researchers can continue to tweak its detection methods and evaluate its success rate. And hey, studying distant celestial objects can get exhausting sometimes, so it’s nice to have the materials delivered to our door for a change.