In a First, Astronomers Capture Birth of Black Hole or Neutron Star 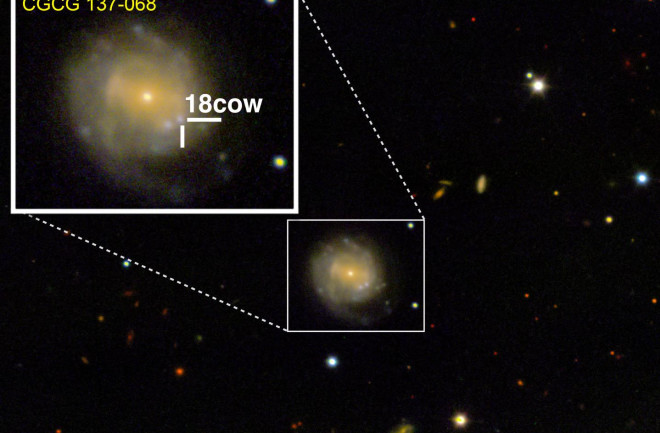 A look at The Cow (approximately 80 days after explosion) from the W.M. Keck Observatory in Maunakea, Hawaii. The Cow is nestled in the CGCG 137-068 galaxy, some 200 million light-years from Earth. (Credit: Raffaella Margutti/Northwestern University)

Some 200 million years ago, not long after dinosaurs first appeared on Earth, a star collapsed in a nearby galaxy. The star’s collapse triggered an ultra-bright explosion that sent radiation racing across the cosmos. The light finally reached earthly skies this past summer, forming a strange, new beacon in the constellation Hercules.

The ATLAS survey’s twin telescopes in Hawaii, were the first to spot the exploding star on June 17, 2018. And astronomers from around the world – including an international team of 45 co-authors from 33 different institutions – soon turned their telescopes and attention to studying the mysterious compact object created in the aftermath. By combining radio waves, gamma-rays, and X-rays, the team suspects the object, officially named AT2018cow and informally called “The Cow,” is likely a black hole or neutron star surrounded by swirling stellar debris.

But the team still isn’t sure exactly what The Cow is. However, seeing as massive stars are known to form either neutron stars or black holes when collapse, the team thinks that the object could be one or the other.

Either way, this is the first time that the birth of such an object has been captured. “We’ve never been able to see them right away at the time of formation,” according to Northwestern’s Raffaella Margutti, who led the research.

The event initially caught researchers’ attention because it was so bright. The stellar collapse was about 10 to 100 times brighter than a typical supernova, and it reached that peak quite quickly. “The reason why everybody got excited by The Cow is because, in the optical, it went up to peak in a few days and it reached a very high luminosity,” Margutti said.

After the bright burst appeared, it quickly used up most of its power within just 16 days, though astronomers were able to monitor the object for 27 days after its discovery. As cosmic events can take millions of years to unfold, this luminous event went by remarkably quick.

According to Margutti, the team was able to capture the moment of formation because the explosion produced about 10 times less stellar debris ejected than is ejected in a typical massive stellar collapse. Typically, a large amount of stellar debris blocks astronomers’ view of the object. But, because there was so much less debris than usual around the event, it gave the team a unique opportunity to see The Cow’s radiation immediately. Located in the dwarf galaxy CGCG 137-068t at only 200 million light-years away, the burst was also relatively close to Earth, which aided in the team’s ability to spot and study it. “This is very close by for this type of event,” Margutti said. “It’s the closest ever found,”

While the team first identified the compact object by observing its X-ray emissions, Margutti and her team took an up-close look at The Cow’s chemical makeup using the W.M. Keck Observatory in Hawaii, the MMT Observatory in Arizona, and the SoAR telescope in Chile. With these observations, the researchers found evidence of hydrogen and helium.

Until now, researchers studying compact objects created by exploding stars have only been able to study them hundreds of years after formation. With these new observations, scientists are able to look at a compact object at a time in its life that has never been captured before. This opens the door to research that has never before been possible.