If You're Having a Good First Date, Your Heart Beats May be Synced

New research that won the 2022 Ig Nobel award affirms that the main source of attraction is when hearts beat in synchrony. 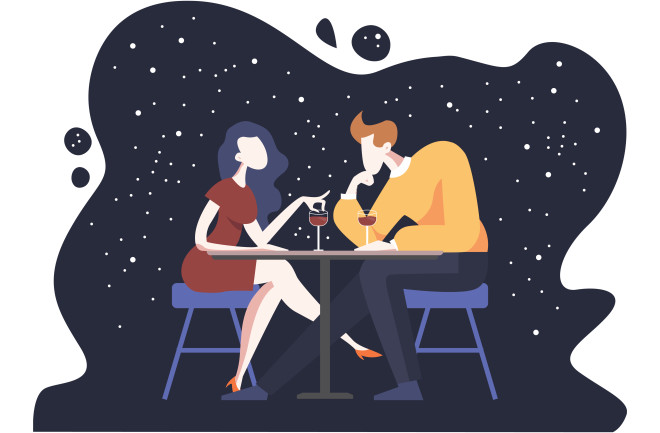 Online dating is big business these days. There are approximately 324 million online daters around the world, according to an industry report, earning app developers an estimated $5.6 billion in revenue in 2021. A considerable portion of those looking for romance online — 42 percent — say they’re on the hunt for a spouse, but only 13 percent end up getting married to someone they meet online. In fact, research has already shown that judging a potential suitor based on written or visual stimuli (for example, an online profile) does not accurately predict attraction during a first encounter.

This disconnect might be caused by how hard it is to pin down a working definition of attraction. Someone can seem witty over text and check all the right boxes on paper, but then the all-important “spark” just isn’t there in person.

Understanding and quantifying how sexual and romantic desirability works is a challenging quest, but it’s one that has nevertheless long preoccupied scientists. A study, published last year in the journal Nature Human Behaviour, sought to bring us a step closer by measuring a host of different biological variables while people were on a first date. The approach won them a much-coveted 2022 Ig Nobel award in September this year. The satirical awards seek to acknowledge and praise quirky research that makes people laugh — and then learn something new.

“We choose to award stuff that will grab people’s interest,” explains Marc Abrahams, editor of the Annals of Improbable research, who established the Ig Nobel awards in 1991. “It’s all about stuff that gets people excited.”

Although the word "ignoble" technically refers to something that isn’t honorable in character, the Ig Nobel awards aren’t meant to make fun of or ridicule scientists, says Abrahams, instead they’re a celebration of strangely amusing research projects.

The latest recipients of the award paired 142 heterosexual participants — half male and half female — for a meeting inside a specially constructed “dating laboratory.” The scientists, based in the Netherlands and the United Kingdom, measured several physiological phenomena during these first dates. The participants wore special glasses embedded with cameras to track their eye movements. The glasses also took data on heart rates and skin conductance, which is how well the skin conducts electricity. A higher level of skin conductance is a known biological response to an arousing experience.

Read More: When Hearts Beat As One

Interestingly, the scientists found that signaling behaviors such as smiling, laughing or eye contact were not correlated with attraction. Nor was the mimicry of such social cues. Instead, what most accurately predicted attraction was when partners’ hearts start to beat in synchrony. Skin conductance was also a good interpreter of attraction. This led the researchers to suggest that the attraction levels between partners ebbs and flows as their subconscious arousal levels rise and fall in tandem.

In the end, it’s the covert biological signals that give away a person’s attraction to another — and that’s simply not something that can be deduced from an online profile. In other words, it’s impossible to say for sure how you’ll feel about someone until you meet them. With that in mind, perhaps the most important part of online dating isn't actually about the "online" part at all. Rather, it's about progressing from the in-app messaging to an actual first date where the sparks can really start to fly.