If the Aliens Have Cities, Will We Be Able to See Them? 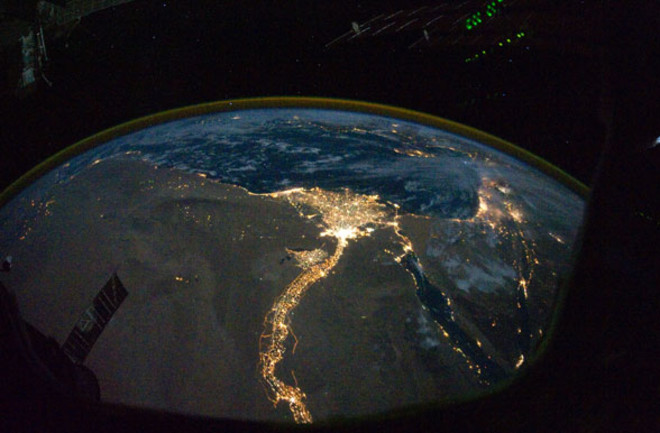 Did you hear the one about the two astrophysicists on the bus? It was January 2010, during a workshop in Abu Dhabi, when they took off for a tour of Dubai—a city so bright it could be seen from outer space, the guide boasted. Later that day the astrophysicists, Avi Loeb of Harvard and Edwin Turner of Princeton, tried figuring out how far from Earth they’d have to go before the lights of Dubai became invisible. Then they turned their perspective around and wondered what it would take to seek alien civilizations by looking for distant analogues of Dubai, or Las Vegas, or Times Square.

Up until now, the search for extraterrestrial intelligence, or SETI, has primarily involved listening for radio signals deliberately or inadvertently sent by alien cultures into space. But away from the academic grind, Loeb and Turner saw city-spotting as an alternative way to hunt for ET. One virtue of the scheme was that it made few assumptions about the aliens. They didn’t have to be beaming messages at us; they merely had to share our fondness for artificial light, something common to every modern society on Earth. But the astronomers’ initial back-of-the-envelope calculations were not encouraging. Detecting light pollution from planets orbiting other stars is far beyond the capabilities of today’s instruments, they realized.

Loeb and Turner shelved the notion, but then they talked to Freeman Dyson, the physicist renowned for his seminal contributions to quantum field theory and equally famous for his provocative speculations. In the 1960s he conceived of Dyson spheres—structures manufactured by advanced civilizations that would completely surround stars, capturing most of their energy. More recently he suggested that parabola-shaped plants (which he called “sunflowers”) could survive on the solar system’s cold fringes by concentrating the weak sunlight available there. When Loeb mentioned the concept of searching for the lights from extraterrestrial cities, Dyson urged him to write it up.

To prepare a paper for publication, Loeb and Turner worked out some hard calculations based on the most detailed views afforded by the Hubble Space Telescope. They concluded that Hubble could detect a city as luminous as Tokyo at 1,000 times the distance between the Earth and the sun. That would place it deep in the outer solar system, well beyond the Kuiper belt where Pluto resides.

Why Tokyo? The researchers homed in on the city not only because it is one of our planet’s brightest urban centers but also because Turner—a self-described Japanophile—happened to be there at the time. After the Fukushima nuclear disaster, moreover, he had ready access to detailed information about Tokyo’s power consumption, much of it used for illumination.

In their paper, Loeb and Turner outlined how to differentiate between a naturally illuminated object in the solar system and an artificial light source. The scientists relied on the inverse-square law of physics, which states that the intensity of light drops off according to the square of the distance between the light source and its target. Following this law, light traveling from the sun to a distant spot—Pluto, for instance—diminishes with the square of distance; light reflected back from Pluto to the sun then gets diminished by the same factor. The two factors multiply, so by the time the light returns to the sun, it has decreased according to the fourth power of distance. (Earth is so close to the sun relative to Pluto that the fourth-power pattern holds for us as well.) But if there were an artificial light source on Pluto, its apparent intensity would decrease not with the fourth power but with the distance squared—because the light is traveling one-way, not round-trip.

The secret to distinguishing between natural and artificial light sources, Loeb and Turner realized, is making multiple observations of an object in motion. All bodies orbiting the sun move in somewhat oval paths. As they move, then, their distance from us changes and so does their apparent brightness. If the original source of light was the sun, the brightness would vary in proportion to the fourth power of the change in distance; if the light was artificially produced, its intensity would change with the distance squared.

At the Solar System’s Edge

Although Loeb and Turner were disheartened to learn their strategy could not be readily extended to planets around other stars, the vast, unexplored realm of the outer solar system has plenty to offer. Dyson views the Kuiper belt as a fascinating patch of real estate: billions of bodies consisting of ice and “just the right [minerals]. If life could be established out there, it would have all the essentials—chemistry and sunlight, everything that’s needed,” he said in a TED talk in 2003.

Loeb and Turner published their work online last fall and in the journal Astrobiology in April, but the astronomy community’s reaction has been equivocal. “If I had to pursue just one strategy in SETI, this would not be the thing I’d pick,” says Dan Werthimer, a SETI expert at the University of California, Berkeley. “But I think the best strategy is to choose lots of things, because it’s hard to know what ET is doing.”

The Dubai duo embrace this point of view. Rather than ruling out ideas on the basis of the conventional wisdom (i.e., mostly uninformed prejudice), the whole point of the scientific method is to check things out for ourselves—especially when the cost of doing so is modest and the potential rewards are great. In that spirit, Loeb and Turner want to press on with their search for artificial-looking light sources. They accord their scheme little chance of success but pursue it because it touches on a momentous question: whether there are other intelligent beings in the universe, possibly right here in our cosmic neighborhood.

The beauty of their proposal is that it can piggyback on two planned astronomical surveys. The first, the Panoramic Survey Telescope and Rapid Response System, will rely on a network of four telescopes in Hawaii to hunt for small, fast-moving, nearby objects such as asteroids, comets, and bodies in the Kuiper belt. The second, the Large Synoptic Survey Telescope, has similar scientific goals, though it will scan the sky from the Southern Hemisphere vantage point of a mountain in Chile.

“If we find objects whose brightness changes with the inverse square of distance, we won’t say, ‘Oh, no! Aliens in the solar system!’ ” says Turner. “But we will want to point other telescopes there and try to figure out what’s going on.”

Cities Around Other Stars

The reality is that astronomers barely know the basics about Kuiper belt objects, much less whether they harbor life. They are so small and distant that they look like points of light in even the largest telescopes. Brightness changes are in fact one of the few things we can study about these enigmatic frozen bodies, so every scrap of information is bound to turn up something new.

“At the very least, we’ll learn a lot about Kuiper belt objects, gaining insights into their shape, spin, and reflectivity,” says Loeb. “We’ll extract new information, and we’ll do it statistically, for a large number of objects, so we can do good science even if there are no civilizations to be found.”

Someday, with more powerful technology at our disposal, we might go further, spying on an alien city (or gambling strip) on an Earth-like planet elsewhere in our galaxy. Spotting ET's urban glow out to about 30 light-years—roughly the distance to the nearest known stars with potentially habitable planets—would take a telescope at least a million times as powerful as the Hubble Space Telescope orbiting Earth.

Instead of Hubble’s 2.4-meter (7.9-foot) primary mirror, then, astronomers would have to build a telescope with something like a 2,400-meter mirror. That is about a mile and a half wide. Building such a huge instrument is out of the question using current technology. For now we will have to rely on human ingenuity to come up with the tools needed to see planets bathed in urban light.

Perhaps ET has beaten us to the punch. They could be monitoring our cities now, watching the latest giant casino switched on in Vegas or towers of light sprouting in Dubai.

Steve Nadis, a science writer based in Cambridge, Massachusetts, is coauthor of

The Shape of Inner Space.