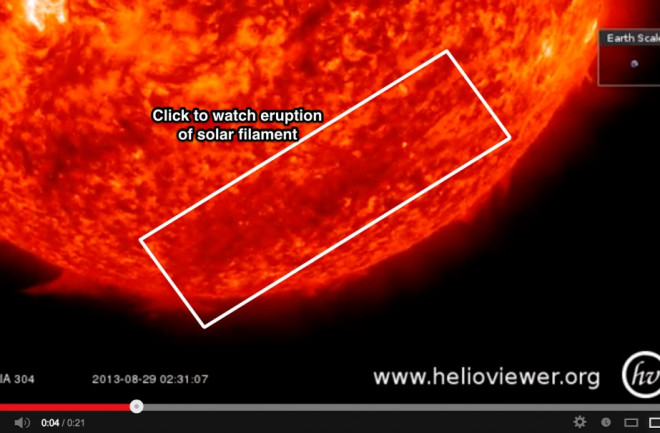 Screenshot from an animation showing a filament about to erupt from the sun on Aug. 29, 2013. Note the image of Earth at upper right for scale. The animation is from NASA's Solar Dynamics Observatory spacecraft. (Source: Helioviewer.org) A twisted rope of gas more than 50 Earths across roiled above the sun's photosphere yesterday and then erupted, spewing billions of tons of particles out into space at millions of miles per hour. NASA's Solar Dynamics Observatory captured the action. The screenshot above is from an animation of the filament eruption viewed by SDO in extreme ultraviolet light. Click on it to watch the animation. Below you'll find other views of the eruption, so make sure to keep reading. Filaments appear dark against the sun's surface because they are made up of cooler and denser plasma than their surroundings. (When seen against the blackness of space, they appear bright and are called prominences.) These features are secured to the sun's surface, or photosphere, by magnetic fields, but they can extend far outward in arches, loops and bridge-like structures. When the whole structure becomes unstable, it can burst, releasing the plasma. Here's a closeup view the plasma bursting outward into space from yesterday's filament eruption: http://www.youtube.com/watch?v=2haDNqOryZY Material from eruptions like this can damage satellites and endanger astronauts. And by buffeting Earth's protective geomagnetic field, the particles can cause disruption to radio communications, navigation systems and electrical distribution systems. Not to worry though. The Space Weather Prediction Center is not forecasting any significant impacts from this filament eruption. Here's a broader view of the event, seen in an extreme ultraviolet wavelength of light useful for seeing detail in the sun's corona, or outer atmosphere. Make sure to look for a long bright area blossoming on the sun's surface after the filament erupts: http://www.youtube.com/watch?v=AYZgdtfMZsU I think this view really emphasizes the roiling nature of the filament just before it erupts. Lastly, check out this view from the LASCO instrument on another spacecraft, the Solar and Heliospheric Observatory, or SOHO. Watch for the material bursting out from the sun in a coronal mass ejection, or CME: http://www.youtube.com/watch?v=7aZIHNGq6O4 LASCO is a kind of telescope that uses a solid disk to cover up the sun, thereby blocking out direct sunlight and allowing details in the sun's corona to be seen.