WASP-121b is so hot that the planet has puffed up beyond its ability to hold onto its own atmosphere, and is instead streaming it away as it flies around its star every 30 hours. 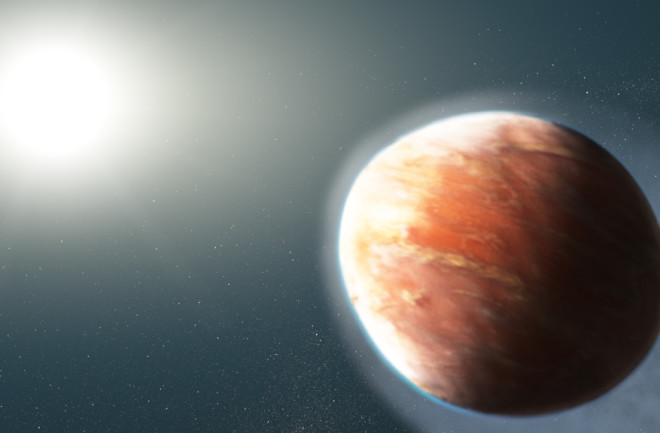 Astronomers just used NASA’s Hubble Space Telescope to take the temperature of an exoplanet called WASP-121b and discovered that the world is so hot that heavy metals actually leak behind it as it whips about its central star. It’s the first time scientists have seen such a phenomenon.

Since the beginning of the exoplanet era, when astronomers began finding planets outside our solar system, these so-called hot Jupiters have demanded attention. They’re as big or bigger than our planet Jupiter, made of mostly gassy hydrogen and helium, and orbit shockingly close to their stars. These monster planets can take mere hours or days to orbit. And as a result of their clinginess, they can be heated to thousands of degrees.

But WASP-121b is extreme even for its class. The planet has an upper atmosphere some 10 times hotter than any other world yet measured. Astronomers think that intense heat is what’s causing the metals, in addition to lighter materials, to puff up and stream away from the planet.

“Heavy metals have been seen in other hot Jupiters before, but only in the lower atmosphere,” David Sing of the Johns Hopkins University in Baltimore, Maryland, said in a press release. He’s the lead author on the paper published August 1 in the Astronomical Journal. “So you don’t know if they are escaping or not. With WASP-121b, we see magnesium and iron gas so far away from the planet that they’re not gravitationally bound.”

WASP-121b is located about 900 light-years away from Earth, and orbits a star slightly larger and hotter than our sun. In some ways, it’s similar to many other hot Jupiters. The intense heat from its nearby star has made WASP-121b puff up like a marshmallow. That puffiness means it has less gravitational control over its outer layers, and the nearby star is all too happy to start tugging that material away. So as WASP-121b orbits, astronomers can see it being stretched out into a football shape and actively losing material as it circles its star.

And WASP-121b’s extreme heat is totally new. That’s what allows not just light gases like hydrogen and helium, but even heavy metals like iron and magnesium, to stream away. Usually, these heavier materials stay condensed in a planet’s lower atmosphere, even at scorching temperatures. But WASP-121b’s 4,600 degrees Fahrenheit is enough to loft even heavy metals high into the atmosphere, where the planet appears to be losing them.

Astronomers knew WASP-121b was an extremely hot planet when they started investigating it using the Hubble Space Telescope. They watched the planet during transits, when the planet passes in front of its star as viewed from Earth. The planet and its escaping gases are too far away to see directly, even at their scorching temperatures. But astronomers can track the light they measure from the WASP-121 star, and how it changes when the planet or its trailing gases pass between the star and Earth. That detailed view is what led them to the identity of the metals also streaming away from the planet.

Astronomers don’t think hot Jupiters like WASP-121b can form this close to their stars, precisely because they often see such stars actively losing material. Instead, they think such planets evolved safely away from their stars, like our own Jupiter, and migrated in later. They also suspect that some smaller planets on close orbits are actually former hot Jupiters that have lost all their puffy outer layers, leaving behind only dense cores.

Observations like these seem to point to astronomers being on the right track about hot Jupiters losing mass. As new telescopes like the James Webb Space Telescope come online in upcoming years, astronomers will be able to look for even more types of materials around these extreme planets.