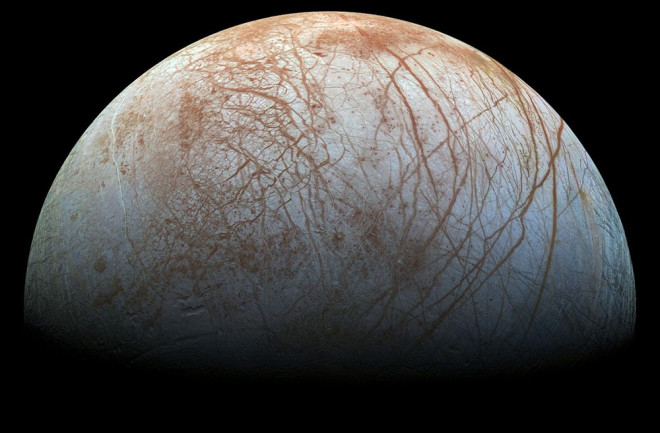 (Credit: NASA / Jet Propulsion Lab-Caltech / SETI Institute) Hubble hasn’t found aliens on Europa, but it may have found new evidence that plumes of salt water from the moon’s globe-spanning salty ocean can escape through cracks in its icy shell. Using its Space Telescope Imaging Spectrograph (STIS) instrument, Hubble captured far-ultraviolet images of what could be geysers of water from beneath the surface, erupting in Europa’s southern hemisphere. If the features in those images are really geysers, that could be very good news for future missions to Europa, providing an easier source of samples from Europa’s subsurface ocean and making it easier to search for signs of life beneath the ice. Space Science Telescope Institute astronomer William Sparks and his colleagues borrowed a method from exoplanet research and applied it to a potentially habitable world much closer to home (in relative space terms, anyway; Europa is about 390 million miles away). When an exoplanet passes in front of its star, astronomers can look at the very edge of the visible part of the planet, called the limb, to see what wavelengths of light from the star get absorbed by the thin band of the exoplanet’s atmosphere. Because different chemicals absorb light at different wavelengths, that can yield clues about what alien atmospheres are made of. In early 2014, Hubble looked for features along Europa’s limb that might absorb the sunlight reflected by Jupiter. Hydrogen and oxygen both absorb light in the ultraviolet wavelengths, so Sparks and his colleagues looked at Europa in the far ultraviolet. Hubble sent home ten images of Europa’s silhouetted surface, and features that might be geysers appeared in three of them. “Anything that absorbs [light] will appear in our image. We presume it to be water vapor or ice particles because that’s what Europa’s made of and those molecules do absorb at the wavelengths we observed at, which is why we chose those wavelengths,” said Sparks during a press conference earlier today.

Another Piece of Evidence

This is the second piece of evidence for geysers on Europa, following a 2012 Hubble observation of hydrogen and oxygen in potential plumes coming from the same areas of the planet’s southern latitudes. Because Europa is tidally locked with massive Jupiter, it always shows the same face to Earth, much like our own Moon. The Galileo mission, launched in 1989 and which arrived at Jupiter in 1995, did a single scan for plumes erupting from Europa, but came up empty. If the plumes are really there, says Sparks, they won’t exactly be the Europan version of Old Faithful; they’re most likely intermittent. “It’s significant because previously there’s just been one piece of evidence that these things exist. Now we’ve got a couple more pieces of evidence that they exist,” said Sparks.

The plumes could become targets for a planned Europa flyby mission, tentatively slated for launch in the 2020s, which will carry a spectroscopic instruments from infrared to far ultraviolet, as well as instruments to measure the composition of samples – such as material from watery plumes. Thermal imaging will also allow the Europa flyby spacecraft to look for hotspots (or at least relatively warm spots) in the ice where plumes might erupt. It’s possible that the mission could fly a pass, or several, through Europa’s plumes, much as the Cassini spacecraft flew through the jets of water erupting from the south pole of Saturn’s moon Enceladus. Mission planners are still planning potential trajectories, and they’re interested in narrowing down which of the possible plumes might be the best target. It’s unlikely that we’ll find life in those plumes, but the flyby mission could look for signs of organic chemistry that might provide a strong clue. “Even if there is a small amount of biomass in the plumes as they start out from the ocean, by the time they get into space and the radiation environment of Europa at cryogenic temperatures, it’s not going to survive,” said Sparks. “We’d have to be looking for the remains of something that was once protected in the ice or under the ice.” Of course, the Europa flyby mission, if it gets off the ground, won’t be a true search for life. The flyby will focus on determining whether Europa is habitable in the first place, in part because that’s the part scientists currently know how to do. Scientists have a well-established set of criteria for deciding whether a place is habitable, but they’re still debating what to look for to prove that life exists, or doesn’t exist, on another world. As for whether there’s life in the plumes, “I would say the jury is out,” said senior Hubble project scientist Jennifer Weissman. “It really depends first on whether these plumes are actually there.”

Nothing Is Proven Yet

And that’s still waiting to be confirmed. Sparks and his team were careful to point out that these observations aren’t definitive proof that the geysers are real, although they are compelling when combined with the 2012 evidence from Hubble. The far-ultraviolet wavelengths are right at the limits of Hubble’s capability. The researchers say it’s likely that the features that showed up in three of the ten images are probably real, rather than some unexpected effect from the instruments, though they can’t completely rule that out. Repeated Hubble observations would help confirm that the STIS instrument is operating properly in the far ultraviolet, which would improve confidence in the observations. “The other thing that would really, that could potentially nail it would be if somebody came in with a completely independent observing technique and the results were consistent,” said Sparks. Some teams are starting to look for other means of detecting plumes, but that’s probably a ways off. In the meantime, Hubble observations may offer the best way to keep an eye on Europa and its potential geysers. "When we cannot fly a mission up close, the next best thing is to use the Hubble Space Telescope and some of its unique capabilities to study Europa from afar," said Paul Hertz, director of the astrophysics division at NASA's Science Mission Directorate.