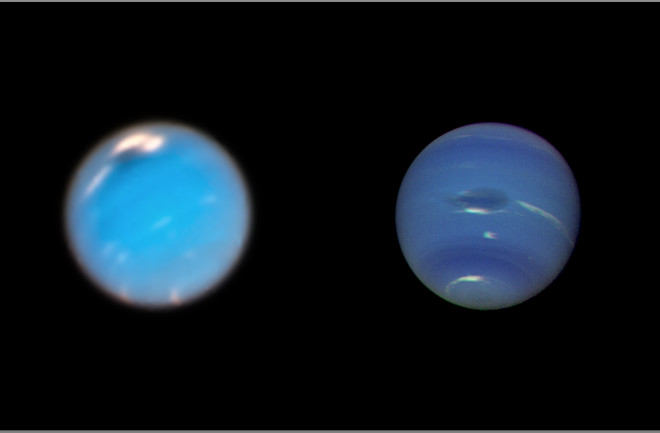 Neptune has a new storm, in the form of a large dark spot that appeared in late 2018. By analyzing Hubble images dating back to 2015, astronomers have discovered high-altitude clouds that formed years ahead of the visible storm, indicating it was already forming there, swirling beneath the clouds and haze. The telltale clouds are teaching astronomers more about how such storms form and evolve on all the giant outer planets.

Birth of a Storm

Neptune, like all the outer solar system planets, forms large and durable storms. While Jupiter’s Great Red Spot is infamous, Neptune’s dark blue spots were unknown until Voyager 2 flew past in 1989, sending back pictures of two large storms on its surface. Jupiter’s Great Red Spot has been visible for at least 190 years, and possibly since the 1600s. But when Hubble peered at Neptune in 1994, its storms had already vanished.

Since then, Hubble has spotted dark storms appearing and disappearing on Neptune, lasting only two years or so – though maybe up to six years – before dissipating again. Like hurricanes on steroids, Neptune’s storms are dark vortexes of clouds racing at high speeds, each roughly the size of planet Earth. But Earth storms rarely last more than a few weeks, and form around low-pressure areas. On the giant planets, they instead form around regions of high-pressure.

“That makes them more stable to start,” says Simon. “And there are no land masses. That’s what breaks storms up on Earth.” On Jupiter, the planet’s jet streams lock its massive storm in place near the equator, where it has safely churned for centuries.  On Neptune, wind patterns push the storms north or south where they get shredded by opposing wind currents within a few years.

Hubble also often sees white methane clouds floating at the top of Neptune’s atmosphere. These are pushed aloft by the high-pressure storm systems, says Amy Simon of NASA’s Goddard Space Flight Center, who led the recent study. But, she adds, “Sometimes we see high clouds that don’t have a dark spot associated.” So while astronomers can’t predict for sure where a storm will form, they can look back and trace its history, even before the dark spot itself became visible.

This became obvious when Simon and her colleagues were looking at images of Neptune’s clouds from 2015 through 2017, and realized that they hovered just where the dark storm eventually appeared in late 2018. This tells astronomers that the storms form over long periods of time, deeper down in the atmosphere than Hubble can spy.

By having new evidence of the storms to observe, Simon and her colleagues hope they can better understand how storms form on all the major planets. “The computer models have a hard time forming these storms,” Simon says. And with no dedicated missions to the ice giants yet (Voyager 2’s flyby was the closest approach to either Neptune or Uranus), computer models are vital to understanding the stormy worlds.

Simon hopes that the new information will let researchers make advances in understanding the churning atmospheres of these distant planets. Simon’s research was published March 25 in Geophysical Research Letters.

Editor’s note: An earlier version of this story featured a caption that misidentified the image taken by the Hubble Space Telescope.