How We Won the Hominid Wars, and All the Others Died Out

The unique adaptability of Homo sapiens  is what allowed us to survive when so many other species  died out, paleoanthropologist Rick Potts contends 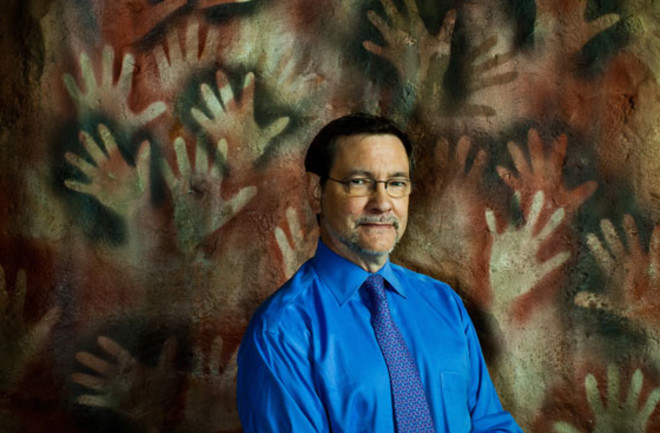 How did our species come to rule the planet? Rick Potts argues that environmental instability and disruption were decisive factors in the success of Homo sapiens: Alone among our primate tribe, we were able to cope with constant change and turn it to our advantage. Potts is director of the Smithsonian Institution’s Human Origins Program, curator of anthropology at the National Museum of Natural History in Washington, D.C., and curator of the David H. Koch Hall of Human Origins, which opened at that museum last year. He also leads excavations in the East African Rift Valley and codirects projects in China that compare early human behavior and environments in eastern Africa with those in eastern Asia. Here Potts explains the reasoning behind his controversial idea.

Why did our close relatives—from Neanderthals to their  recently discovered cousins, the Denisovans, to the hobbit people of Indonesia—die out while we became a global success?

That is the million-dollar question. My view is that great variability in our ancestral environment was the big challenge of human evolution. The key was the ability to respond to those changes. We are probably the most adaptable mammal that has ever evolved on earth. Just look at all the places we can live and the way we seek out novel places to explore, such as space.

The classic view of human evolution doesn’t emphasize adaptability. It focuses more on the idea that we were inevitable: that famous march from ape to human. It’s a ladder of progress with simple organisms at the bottom and humans at the top. This idea of inevitability runs deep in our societal assumptions, probably because it’s comforting—a picture of a single, forward trajectory, ending in modern humans as the crown of creation.

But recently discovered fossils show an incredible diversity in the human family tree. That seems like the opposite of a ladder.

Right. The tremendous fossil discoveries of late have given us a lot more knowledge about the diversity of human experiments, and diversity is the theme that needs to be underlined. Yet in spite of the great variety in earlier human species, we are the only one that remains of a diverse family tree. That might seem to indicate something special about us, but in fact even we barely made it. Between 90,000 and 70,000 years ago, our own species almost bit the dust. Several genetic studies show a bottleneck back then, a time when the total number of Homo sapiens was tiny. So we, too, were an endangered species.

How did you come to see adaptability as the key to our ultimate evolutionary success?

I first got interested in this idea during my excavations in southern Kenya, where the changes in different layers of sediment, indicating different habitats at different times, were really obvious. Every layer suggested a change in vegetation as well as moisture, the kinds of other animals that were around, and the survival challenges faced by our ancient predecessors. I wondered if our lineage thrived precisely because our ancestors could adjust to those changes. I called this hypothesis variability selection—the idea that change itself was a selective pressure. Repeated, dramatic shifts in the environment challenged many species and may have actually selected for the features that have come to typify Homo sapiens, especially our ability to alter our immediate surroundings.

In the classic view, it was thought that we emerged on the savanna as conditions dried and cooled. We imagined our earliest ancestors in a backdrop of dry and grassy plains that basically forced the emergence of walking upright, tool use, and a larger brain, ultimately leading to language and culture and global success.

Now, it’s certainly true that there has been marked global cooling and drying over the last 70 million years. But during the period of human evolution [since the appearance of our first direct ancestors in Africa], there were actually very pronounced fluctuations between warm and cool, between moist and arid. One way you can tell is by looking at different oxygen isotopes in the fossilized skeletons of ocean microorganisms. A heavier isotope is present during cooler periods, and a lighter one in warmer periods. I plotted out the variability in million-year intervals and found that about 6 million years ago, that variability went off the charts and kept increasing. That struck me as really strange, because that’s the time when the human story begins. African environments showed especially strong shifts between arid and moist climates during the past 4 million years.

Our ancestors had to survive all these settings. I started to think, What if all that variability is not noise in the overall cooling and drying trend, but a very important test of the capacity of a creature to survive? This idea helps explain how we started out as a small, apelike, herbivorous species 6 million years ago in tropical Africa, and after a history of origin and extinction of species, what’s left today is us: a single species all over the planet with an astonishing array of abilities to adjust.

What are the cardinal features of adaptability that set us apart?

You can go back more than 3 million years to Australopithecus afarensis [the famous “Lucy” species], which over time maintained the ability to walk on two legs and to climb in trees. That’s a primal adaptable feature near the root of our evolutionary tree, and it allowed this species to make its way between areas of woodland and open savannas to find food.

Stone tools, which first emerged 2.6 million years ago, are another feature of our adaptability. When it comes to acquiring and processing food, a hammerstone is better than a big molar, and a knapped flint is sharper than a pointed canine. All manner of foods opened up to the genus Homo with stone tools.

The emergence of a large brain, with complex connectivity among neurons, suggests that the brain itself is an organ of adaptability. It allows us to take in information about the environment, organize, form social alliances, and raise the probability of survival in difficult times. You can see in the archaeological record that our early ancestors transported food from the place it was found to another place where members of the social group would meet. We modified the shapes of stones, we carried food, made fire and protective shelters, and we eventually began to cultivate crops and manipulate the environment in order to grow them. All of these small ways of altering the immediate surroundings strike me as reasonable adaptations to the instability of habitats.

If you are right, what killed off the Neanderthals? They had big brains too. They had stone tools, and they buried their dead, which means they had culture. They were also hardier and better adapted to cold than we are. So what did they lack?

That’s a question we’re exploring now. It’s important not to underestimate the Neanderthals. They endured for a long time in the comings and goings of ice ages.

Whenever glacial habitats invaded Europe and Asia, it appears that the Neanderthals moved south, into Iberia and the Italian peninsula, to take advantage of the warmer places. Overall, their bodies show evidence of cold adaptation. Yet during one cold period, when the Neanderthals retreated, populations of Homo sapiens began to infiltrate the cold regions. How could they do this, especially since these populations were dispersing from tropical Africa? The difference is that these early populations of our species had developed the ability to invent new tools, like sewing needles that were useful in producing warm, body-hugging clothing. Preserved beads and stones suggest that they, but not the Neanderthals, maintained social networks over vast areas. My guess is that in Africa, Homo sapiens evolved better ways of adjusting to the arid-moist fluctuations—the key to adaptability—than the Neanderthals did to the cold-warm fluctuations in their part of the world. There are a lot of scientists interested in testing these ideas with new fossil and archaeological evidence.

In the end, despite the adaptable features they inherited, the Neanderthals ended up as more habitat specialists than we did. Their options were more limited. As a result, our species ended up all over the world while theirs vanished.

Actually, my answer to “Are we it?” is to turn the assumption on its head. Considering that we are the only survivor of a diverse family tree—that is, an evolutionary tree characterized by lots of extinction—the notion that our twig is the final blossom of evolution is incredibly outdated. It’s incorrect no matter how ingrained it is in our thinking. Our amazing adaptability has allowed us to shape the environment to our own needs. This transformation has taken place in a remarkable period of climate stability, over the past 8,000 years or so. One deeply ironic result is that we have now narrowed our own options at a time when climate fluctuation appears to be increasing. Of an estimated 15,000 species of mammals and birds, fewer than 14 account for 90 percent of what we eat. Of more than 10,000 edible plants, three crops—wheat, rice, and corn—provide half the world’s calories. And through greenhouse gases released by burning fossil fuels, we’re pulling on the strings of the earth’s unstable climate.

By narrowing our options at a time of increasing instability, could we be inadvertently engineering our demise?

I see two possible scenarios for the future. We could change our current course and try to work carefully with the natural dynamics of the planet and the uncertainties of the environment, especially when it comes to our own inadvertent effects. Or we could continue shaping the earth in our own image, so to speak. We could theoretically, through engineering, create a membrane around the earth that controls temperature and rainfall, for instance. These two courses represent two very different views of the earth and our place on it. Whether the next chapter of the human story will be the last chapter may depend on the balance we strike between those two courses.