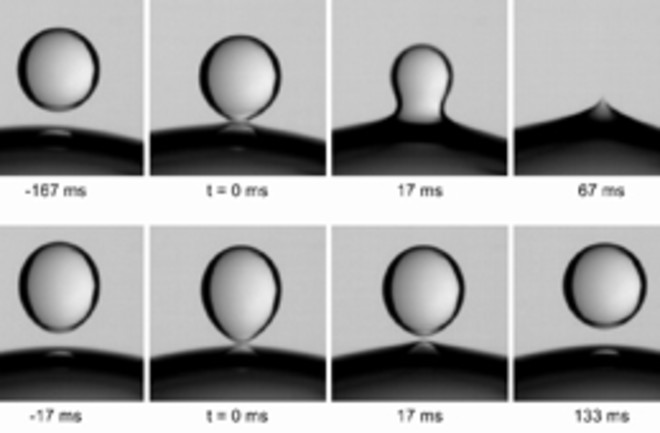 Physicists have found a way to tweak a basic law of nature, and have reversed the rule that opposites--as in oppositely charged droplets of liquid--attract. Typically, when a drop of liquid with a positive charge gets near to another drop with a negative charge, the two come together and merge into a larger whole. But researchers discovered that in a strong electric field with two highly charged droplets, the drops bounce off each other instead. In the study, published in Nature, researchers used high-speed video to find out what was happening. Drops of liquid usually form tight spheres, but

as two electrically charged droplets come close to each other, the spheres begin to warp — and at very short distances, a small bridge of fluid forms between the drops. When the electrical charge is low, that bridge grows until the drops merge together, but when the charge is high, something else happens: the bridge allows the droplets to exchange their charge and then snaps. The water flows back into the bubbles, and by the time the two drops collide, they are back in their spherical shape. Rather than merging, their surface tension causes them to bounce off one another like beach balls [Nature].

The work may sound more like a fun lab trick than vitally important science, but researcher William Ristenpart explains that the findings have implications for many high-tech industries that use electric fields to manipulate tiny water drops. For example, the

discovery probably explains why the petroleum industry has not been able to achieve greater efficiencies in the electrostatic removal of water from crude oil, Ristenpart says, a process that has been used for nearly a century, though he adds that the process is extremely difficult to observe because of the opaqueness of the oil [ScienceNOW Daily News].