How to Keep Things Hot at Yellowstone and Katla: Just Add Water 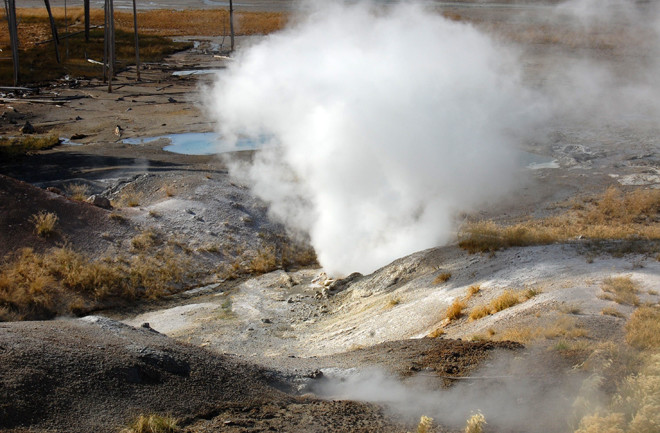 A large fumarole (steam vent) in the Norris Basin at Yellowstone. The steam escape the hydrothermal system here might be over 400C.

Erik Klemetti. Two volcanoes that get the interwebs all hot and bothered have made the news in the last week. First, Katla in Iceland produced some glacial flooding (jökulhlaups) that followed some earthquakes. Second, over at everyone's favorite caldera, Yellowstone, there has been a lot of buzz over roads melting due to heat from the volcano. Now, as odd as it might seem, these two events are connected by the same process: geothermal (and hydrothermal) activity. When it comes down to it, most volcanoes are sitting on big heat sources. One way to lose the heat is by erupting, but probably the most important way to lose the heat is by the circulation of water in the crust. This water help keep things hot by efficiently moving heat generated by the magma that might be 5-6 kilometers (or more) below the surface and bringing it up to the surface -- all of this happening when there is no threat of an eruption. When you examine the history of a volcano, you'll quickly see it spends much of its existence not erupting. However, during those periods of quiet between eruptions, there is plenty going on beneath the volcano. The magma is cooling and releasing heat and fluids in the surrounding rocks, causing the development of a hydrothermal system above the cooling magma. This is usually the top 5 kilometers of crust above the magma, where cracks in the rocks can help hot fluids rise from the magma and cool fluids (like rainwater or snowmelt) percolate down into the crust and heat up. So, how hot does it get under a volcano? Well, by examining the exposed innards of extinct volcanoes, we can see how much alteration the rocks and minerals have experienced. This is an important step in understand how certain valuable ore deposits, like porphyry copper, form above bodies of magma under volcanoes. Looking at these zones of hydrothermal alteration, it is clear that the subsurface temperatures get hot -- upwards of 300-500°C

even multiple kilometers above any cooling magma body. Now, that heat isn't getting there by conduction alone. Rock isn't a very good conductor, so heat won't travel far. However, if you heat up water traveling through cracks in the rock, you can transport a lot of heat upwards. That's because water has a high heat capacity - think about how the Gulf Stream brings warm water from the tropics to the North Atlantic to keep Europe warm. That is what allows all the alteration to occur and for hydrothermal systems to form. These hydrothermal systems are constantly changing based on the seasons (thanks to changing access to water percolating into the crust), seismicity that opens and closes cracks and yes, even magma moving. However, most of the time, the changes in the system are merely due to new routes these hot fluids take to reach the surface.

What are the manifestations of these hydrothermal fluids? You see some of them at most active volcanoes: steam vents (fumaroles), hot springs, geysers, mud pots. Each is a different way heat escapes the ground. Steam vents tend to be the hottest, releasing steam (with other volcanic gases) at temperatures of 300-500°C. Geysers are explosions of superheated water, so they will be ~100°C. Hot springs and mud pots tend to be much cooler, with temperatures usually 20-70°C, depending of the vigor of the spring or geyser.

Glacial flooding from underneath Mýrdalsjökull in Iceland, seen at Múlakvísl.

Icelandic Met Office So, even moving water through the crust can bring a lot of heat upwards and that is common at most volcanoes -- as are changes in the hydrothermal system over time. So, what is happening at Katla and Yellowstone?First, at Katla, the hydrothermal system works underneath a large ice cap (Mýrdalsjökull). Especially during warmer months, more water can percolate into the crust, causing changes in the hydrothermal system (which, by itself, can generate earthquakes). If more heated water and steam is allowed to reach the surface, then more ice can melt and pond until it is catastrophically released as a flood. Reports from the Iceland Met Office support this idea - the waters are warm as they come out from under the glacier. However, unlike an eruption-driven event, the melting isn't accompanied by a continuously increasing number of earthquakes that would betray magma moving. So, the most likely explanation for these floods is increasing melting due to changes in the hydrothermal (geothermal) system, not an eruption. These sorts of floods have happened before during this time of year at Katla, sometimes more dramatic than others. Now, at Yellowstone, we have a different manifestation of the same thing. The news has splashed images of melting roads on Firehole Lake Drive in an area with intense hydrothermal activity. The usual suspects (e.g., the Yellowstone disaster groupies) want to say this is evidence that an eruption is in the works. Well, again, sorry to disappoint the lunatic fringe, but it isn't. Instead, this is a sign that the hydrothermal system under Firehole Lake Drive has shifted some -- maybe due to the constant seismicity that gently shakes Yellowstone, maybe due to the water table, maybe even due to the road itself -- and now heat is coming up directly under the road. Now, asphalt like that can melt at temperatures as low at ~50-70°C, so well within the range of most hydrothermal features. Measures of the road surface by NPS workers are ~70°C, so we're well within the range of temperatures needed to melt the road. Just move where that hot spring or fumarole is coming up and boom, you have heat under the road, melting it.

Bumpass Hell, the hydrothermal area near Lassen Peak in California.

Erik Klemetti. I've seen roads get damaged or destroyed by changing hydrothermal vent locations around Lassen Peak (see above) and in Rotorua in New Zealand -- both places with active hydrothermal systems and shockingly, no giant eruption following the damage to the road. There are many places in Yellowstone itself where parking lots have been closed due to changes in the location of hydrothermal vents, causing them to melt and collapse due to the increased heat. This is by no means a harbinger of doom but rather exactly what we might expect in a place with an vigorous hydrothermal system. In a sense, Yellowstone is less of a "supervolcano" than a "super plumbing system" moving fluids around the crust. Now, the real hazard from changing hydrothermal systems at Yellowstone is not a giant "super-eruption", but rather much more dangerous (because they are far more likely) hydrothermal explosions. These are caused by superheated water and steam getting trapped and then releasing catastrophically. These can happen without warning and if you're too close, you'll be covered with boiling water and debris from the explosion. As usual, the place to look for the most accurate information about potentially hazards at Yellowstone is the Yellowstone Volcano Observatory. If they're worried, so should you. They monitor the temperatures of these hydrothermal features across the caldera and if there are widespread changes, they examine them to see if they could be related to magma moving (least likely) or merely the shifting of the hydrothermal system (most likely). So, remember, the increasing heat at the surface near a volcano isn't always from magma -- it can merely be caused by changes in how hot water and steam move through the crust. It is one of the ways that volcanoes can dissipate the heat released by magma cooling underground and more importantly, it doesn't have to be magma that is trying to erupt.