How to Deflect a Killer Asteroid

Researchers come up with contingency plans that could help our planet dodge a cosmic bullet. 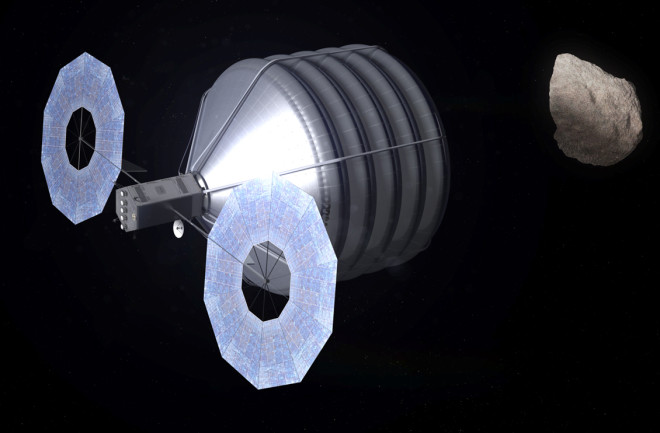 How NASA could capture an asteroid: A probe approaches and aligns with a small space rock (above), then unfurls what amounts to a high-tech bag and slips it around the target. | NASA/Advanced Concepts Lab

Sign up for our email newsletter for the latest science news
This map shows the overlapping orbits (blue) of the 1,400 known Potentially Hazardous Asteroids — objects more than about 400 feet wide that can approach within 4.6 million miles of Earth. | NASA/JPL/Caltech

To defeat the enemy, you have to think like the enemy, according to the old military cliché. If so, then Rusty Schweickart is exactly the guy you want on your side when the enemy is a giant space rock.

As the co-founder of the nonprofit B612 Foundation, he is a leader in the effort to find and ward off threatening space rocks. And as the lunar module pilot on Apollo 9, he once sailed through space at 5 miles per second. “I’ve been out there. I’ve been a human asteroid,” he says with a chuckle.

Despite the obstacles I discussed in this column last month, astronomers are rapidly developing better tools to find and track near-Earth asteroids. Inevitably, the day will come when they find one on a collision course. That incoming object will almost certainly not be the world-ender of Hollywood epics; it will likely be something the size of the Trump Taj Mahal, large enough to flatten a city or a neighborhood.

The object also will not have a nice, clean projected point of impact. “Any asteroid impact will actually have a line of risk across the planet,” Schweickart says. “And you’re not going to know where it’s going to hit along that line until just before impact.”

That risk line will be analogous to the hurricane storm-track projections that Gulf Coast residents warily eye every summer, with one crucial difference. Nobody has the faintest idea how to stop a hurricane, but lots of people have detailed concepts of how to deflect an asteroid.

So there are two ways the scenario could play out. The incoming space rock could get progressively closer to Earth, its line of risk getting thinner and shorter until finally it turns into a dot of certain devastation. Or a targeted space mission could adjust the asteroid’s course, shifting the projected impact location until it slides right off the edge of the globe.

Schweickart strongly favors developing the technology for deflection. NASA is in favor of it, too. The cost is not even particularly high compared with other spaceflight projects that are already funded. But right now, it seems like members of Congress are dead set against the idea. It kind of makes you wonder whose side they are on.

In that context, it makes sense that one of the most exciting asteroid-deflection experiments at NASA does not look or sound like a deflection experiment at all. The $800 million mission is called OSIRIS-REx, for Origins, Spectral Interpretation, Resource Identification, Security, Regolith Explorer. (Someone stayed up late thinking of that one.) It should launch in 2016, travel to a 520-meter-wide asteroid named Bennu, grab a sample of Bennu’s surface and bring that sample back to Earth in a canister that arrives in 2023.

Perhaps mindful of the attitudes in Congress, Dante Lauretta of the University of Arizona, the principal investigator for OSIRIS-REx, reminds me that, “this is a science mission.” Those straight scientific aspects are sure to be spectacular. Bennu is a carbonaceous asteroid packed with natural organic compounds, which gives it an intriguing connection with the origin of life.

“Carbon-rich asteroids may have seeded the early Earth with the fundamental molecules that led to DNA, proteins and other critical biomolecules,” Lauretta says. Studying pieces of one such asteroid firsthand will reveal a lot about what kinds of prebiotic material was raining down on Earth (and Mars and the other planets as well) shortly after they formed 4.5 billion years ago.

But as Lauretta points out, Bennu has another, less benign identity. “This object has a one-in-about-2,400 chance of impacting the Earth late in the 22nd century, about 160 years from now. It is one of the most potentially hazardous asteroids.”

How NASA could capture an asteroid: A probe approaches and aligns with a small space rock (above), then unfurls what amounts to a high-tech bag and slips it around the target. | NASA/Advanced Concepts Lab

Some of the other OSIRIS-REx science goals also turn out to be very useful for warding off an Earth-threatening object. “We’re building a spacecraft that’s going to launch from the Earth, rendezvous with an asteroid and characterize all of its fundamental properties in great detail. Then we’re going to descend to the surface in a series of precision maneuvers. Any kind of deflection where you want to rendezvous with the asteroid is going to require those techniques,” Lauretta says.

OSIRIS-REx will also study two other properties that could be vital for future deflection efforts. First, the spacecraft will gather data on Bennu’s internal structure by measuring its exact shape, its surface geology and its gravity field. Those readings will reveal whether the asteroid is a single intact object, a mash-up of disparate ones or a jumble of rocks barely held together by its feeble gravity — necessary information to have before you try to knock an incoming asteroid out of the way.

Second, while orbiting Bennu OSIRIS-REx will measure the intensity of the Yarkovsky effect — the impact of heat on the asteroid’s motion. Sunlight warms the object’s surface, and the resulting thermal radiation emitted by the surface as it cools again gives the asteroid a minuscule but persistent push. Depending on how the asteroid rotates, that push can crank its orbit either farther from or closer to the sun. Incredible as it may seem, heat radiation is the greatest source of uncertainty when projecting which asteroids could hit Earth in the far future.

But while the Yarkovsky effect is a source of dangerous uncertainty, it could also be an instrument of salvation. If scientists can get a good handle on exactly how the thermal effects play out, they could steer a threatening asteroid into a safe orbit just by painting parts of its surface black (to absorb heat) or white (to reflect).

OSIRIS-REx will collect data to assess the practicality of such a scheme. For those who prefer a more macho approach, planetary scientist Steven Chesley of NASA’s Jet Propulsion Laboratory has proposed a companion mission called ISIS. It would crash into Bennu while OSIRIS-REx watches, the better to understand the feasibility of moving an asteroid with a battering ram. “In this budget climate, though, getting to do an experiment like that is highly uncertain,” Lauretta says.

OSIRIS-REx is an approved, science-focused project with a relatively low profile. NASA’s other major asteroid-deflection initiative is the opposite in almost every way: the splashy, controversial, exploration-oriented proposal currently known as the Asteroid Redirect Mission. But its presentation has also carefully circumvented the prevailing political distaste for anything that smacks of saving the world.

NASA Deputy Administrator Lori Garver, a passionate advocate for the mission, cites President Barack Obama’s stated goal of sending humans to explore an asteroid — although in a sense it is the opposite of that concept as well. Instead of rocketing astronauts off into deep space, the Asteroid Redirect Mission would send a robotic spacecraft to a small asteroid, secure it (potentially by grabbing it and stuffing it into a giant high-tech bag) and tow it back to orbit the moon using a hyper-efficient kind of rocket engine technology called solar electric propulsion. The spacecraft would then park the asteroid in a stable, easily accessible location near the moon, where astronauts could visit and perform geologic experiments firsthand.

“The primary goal is human exploration. It gives us a destination for the Space Launch System [NASA’s upcoming family of rockets]. But scientifically, it advances when we can have large asteroid samples,” Garver says. NASA has requested $105 million of the 2014 budget to get started.

The Asteroid Redirect Mission would require finding a suitable asteroid, which itself is not an easy process. The ideal candidate would need to be in an orbit that is already similar to Earth’s, so that it could be easily nudged our way. It couldn’t be too large, no more than about 10 meters across. And it couldn’t be rotating quickly, or else it would be too tricky to hold onto. Checking those boxes would require conducting a more detailed survey of small near-Earth asteroids and scrutinizing their properties. Then the retrieval process would additionally require tracking, stabilizing and moving the winning asteroid into a new orbit.

Those elements make the Asteroid Redirect Mission sound exactly like a search-and-deflection plan. I press Garver on this point. “It’s a side benefit,” she insists. “But wow — we’ll learn how to manipulate asteroids potentially for the future.”

Who Will Stop the Rocks?

Regardless of the presentation, the Asteroid Redirect Mission met a chilly reception in the House of Representatives, where the Committee on Science, Space and Technology passed an authorization bill that would halt work on the project. Money does not seem to be the primary objection. The redirect mission has a total price tag of somewhere between $1 billion and $2.5 billion — a lot, but not drastically more than the cost of OSIRIS-REx. It’s also less than what NASA spends each year on human spaceflight.

Garver says she hasn’t done enough to show how retrieving an asteroid aligns with other aspects of NASA’s overall mission. That is a polite way of saying that Congress frowns upon unilateral proposals that originate outside of Capitol Hill. But she is encouraged by the outpouring of enthusiasm for the Asteroid Redirect Mission, both within NASA and among the public.

“We look back at Apollo as our shining time,” she says. “With this mission NASA has an opportunity to align again with the public culture.”

Striking a similar theme, Schweickart blames the two-, four-, six- and eight-year election cycles in the United States for deflection gridlock. “When you’re dealing with issues where the time horizons are decades or centuries, it’s not clear that government structures match them very well,” he says. On the other hand, stunning events like the Chelyabinsk meteor of last February could help convince the public of the wisdom in investing a modest amount of technological insurance.

Or as Schweickart puts it, channeling his inner asteroid: “If you could prevent a 100-meter object from wiping out the Bay Area and you don’t do it, well, you ought to be strung up.”

[This article originally appeared in print as "How to Dodge a Cosmic Bullet."]